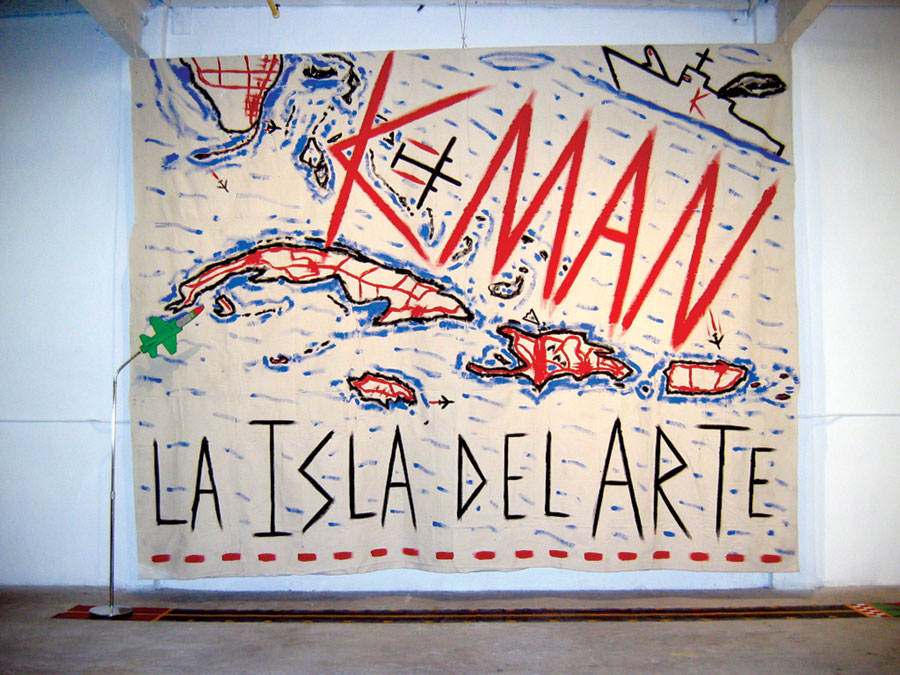 Until he died, Jorge Bartlett lived his art. The performance and visual artist in fact morphed into a persona he called Art Kendallman (a.k.a. KMAN) – he was a man, he lived in Kendall, and he was a piece of art. This is what he had recorded on his Website, under the heading “My Complete Profile”: About Me: Art ; Interests: Art; Favorite Movies: Art;  Favorite Music: Art; Favorite Books: Art. No need to second-guess his true passion.

Art Kendallman might best be remembered as the eccentric character who showed up to galleries in outrageous outfits and confronted the art world, maybe wearing something akin to a space suit, with wild helmet and blinking appendages and model planes attached to his body or bike. He was both a spectacle and someone who took this spectacle very seriously. His get-ups appeared vaguely militaristic and he could seem aggressive in his outlandish arrivals, yet there was always something comic to the performance, something that made you smile.

Sadly, Bartlett / Kendallman stopped smiling sometime before June 28th, and ended his life in a park – in Kendall. But for those who knew him, or just bumped into him over the past two decades, his eclectic presence remains.

“His work and performance (could be) a commentary on war,” says sound installation artist Gustavo Matamoros, who remembers Kendallman from encounters on the street and in more private settings. “But he was a man of peace. And he was bold. He didn’t do things in a shy way, he didn’t care what people thought (of his bold persona)… He lived his art, and he embraced his calling. We need more artists like KMAN.”

He didn’t just act out art, he also crafted pieces – work that reflected his quirky yet serious soul. Like his Kendallman Art Gallery, which was inaugurated in Wynwood during Art Basel 2006.

It was a suitcase on wheels, and in his words it was “perhaps possibly maybe, the smallest art gallery in the world.” It exhibited – can you guess? – miniature avant-garde art. In a small nutshell, the suitcase show summed up Kendallman’s process: he hauled around his miniature gallery, opening it up to anyone and everyone – part performance, part static, substantial in content and theory, humorous in presentation and concept.

“His performance and installation work were childish, funny, innocent, proud, fantasy, and original,” recalls gallerist Lenny Tachmes. “I liked it because he was unfazed by the crowd, and because it was so easy for him to interact with others – adults and children – during the performance.” Tachmes was intrigued enough to open his gallery to a “retrospective” of sorts of Kendallman’s drawings.

Bartlett, born in Cuba and raised in Puerto Rico before moving to Miami, had been drawing and painting since the 1980s, but few locals were familiar with that work, at least in a traditional setting. The Art Kendallman decked out in latex with camouflage and head-gear crashing a gallery might not have endeared gallery owners to him; or maybe Kendallman had little interest in a white-box environment – in any event, he hadn’t shown much around town.

But sometime in 2007, says Tachmes, “I got the feeling that he wanted to be in a show. We got to talking about his drawings that he had collected over 20 years related to different aspects of the Miami art and club scene. Because I grew up in Miami I immediately related to some of his stories and black-and-white doodle drawings.” Those doodle-drawings were classic Kendallman. There were wild images of apes and dogs in uniform and planes and invasions (as far back as the early 1980s, Kendallman was already obsessed with aircraft and its military might – on one resume, he lists a show described as Art Kendallman Aircraft Bombing Art Maneuvers. 1984, 1985, 1986, 1987. Performance Air-Art action of hand-held model aircraft at Coconut Grove Art Fest, Coconut Grove). The manic images were scribbled over with numerous phrases such as “Miamimia, Monkey Ass Fault Jungle,” “Aero-surf USA-Japan Chicken Island Cargo Corp.” and other fairly indecipherable commentary.

In fact, they were not that hard to de-code on closer inspection, and with more familiarity with the artist behind the pen. The madness depicted in those etched worlds reflected Kendallman’s view of our own crazed and crazy one. The drawings exuded a cartoonish quality as well as an ever-present darkness. Are we constantly on the verge of invading, or constantly under assault from real and imagined enemies? Is there no escape?

Kendallman had had run-ins with the law – his guerilla art apparently didn’t go over well with cops – and that harassment weighed on him, according to William Keddell, an artist who shows at Brook Dorsch’s gallery, where Kendallman was often a welcomed invader. Like many a creative soul, those dark moments never strayed far from his thoughts.
{mospagebreak}
In his drawings, the funny and fantastical elements collided always with the menacing ones, as they must have in Kendallman himself. “He was professional in his work ethic, reliable and excited to be part of the exhibition,” remembers Tachmes about his show. “But I got the feeling that he was also yearning for recognition and attention to his work; I think he was … frustrated.” Frustration entered into his feelings for one of his last projects, says Matamoros, who recalls that Bartlett / Kendallman never really knew how to sell himself to the hyper-political and clique-ish art world.

That project was Web-based, and loosely involved a cyber invasion of Puerto Rico, his much-loved former home. It of course involved planes, and flight plans for Kendall-Tamiami and San Juan’s airports, and it was supposed to be interactive. But apparently not many visited his site. The heartfelt artist may have felt the world had just become too heartless – but no one ever knows what makes people check out of this life. All we know is what is left behind, and that was an art worth seeing.

One of his most recent interventions occurred at a big satellite fair during Art Basel, Scope. Tachmes had a booth there, and he remembers Kendallman’s spectacular crash of the party, when he set up his own “booth” that was an installation of another version of an invasion of Puerto Rico. “It was really fun and spontaneous. Adults and children alike would stop at the booth and just watch and listen to the music. Kids would get down on the floor next to him and play with the tiny airplanes, ships and soldiers that he had created, laid out over a map of Puerto Rico. It was nice.”