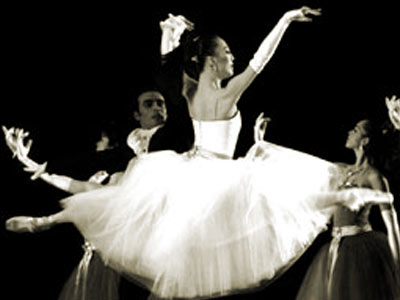 The stage is a dark and mysterious ballroom where thirty-four dancers waltz among each other in flowing romantic tutus to the climactic music of Ravel. La Valse, a neo-romantic ballet, choreographed by Balanchine in 1951, contains a mood of disturbed happiness and impending doom, a thematic element of Ravel’s scores thought to possibly be attributed to the advent of the Great War. Ravel wrote on the score “We are dancing on the edge of a volcano.” and dance critic Arlene Croce wrote that the ballet “is about waltz intoxication, vertigo, and death.” Although Balanchine’s ballet is considered plot-less, it contains many dramatic elements that culminate with the appearance of a dark figure of Death who claims the life of a woman in white.

One of the more noted elements of the ballet are the long dresses worn by the woman in white and the corps female dancers. Barbara Karinska originally designed the elongated tulle ball gowns to compliment the eerie tone of the ballet. The principal female dancer wears a white dress that, later in the ballet during her courtship with Death, is draped over with a black gauze. This visual element happens in front the audience and shows the transformation from innocence into something sinister. The corps wears long skirts attached to grey bodices with six layers of color – red, orange, purple, and pink – all topped by a single layer of translucent grey. They are hauntingly elegant and tinged with death.