There’s a 1954 photograph by Bunny Yeager entitled “Bettie Page, Carol Jean Lauritzen, and Kathy Stanley Jumping (Key Biscayne, FL),” featuring the three titular graces floating above the water, suspended in motion. It’s not difficult to romanticize women on the sea — easier still when the image’s qualities (leisure, the tropics as an exotic space, whiteness) are no longer unquestionably associated with its location. It’s a Miami that mostly lives in the imagination. By my count, there are at least six different versions of the city, none of which resemble this image.

The photo is a sober part of Mere Façade, an otherwise bright, clamoring exhibition at Spinello Projects that confronts all of Miami’s façades — its beauty, ecology, and economy — and the art community’s place among them, welcome or not. Many of the works were featured in previous shows at other spaces and are culled together in new conversations here. In a moment of meta commentary, the gallery looks at itself, too, this sprawling structure along the train tracks in Little Haiti. Determining how truly part of the neighborhood any Little Haiti gallery might be is difficult; the rapidly gentrifying community is where a large swath of Miami art spaces make their home. 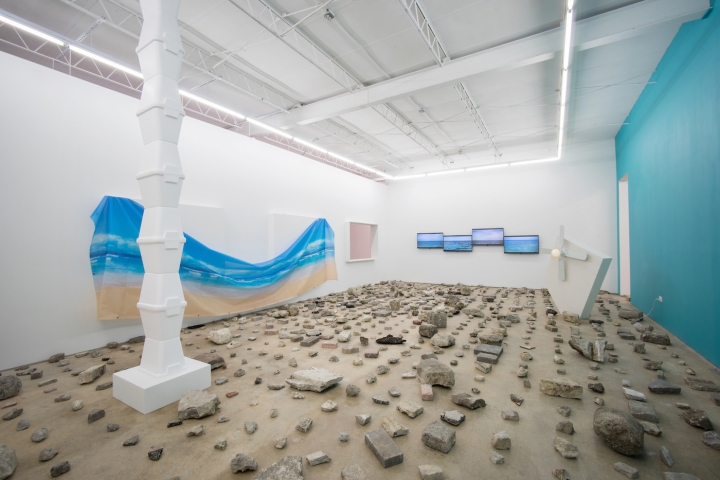 Tom Scicluna examines this literally with “Area” (2017), lining the entire floor of the gallery with a grid of rocks and detritus from the nearby train tracks, shards of dismantled buildings, and hunks of limestone. On the show’s opening night, it rained until the streets flooded; the floor was wet and rocky, and visitors were comically conscious of their movements, an accidental metaphor for navigating a city affected by sea-level rise. Ironically, in their rush to stay dry, few could hear Cara Despain’s “Sea Unseen” (2016), an audio installation tucked into a storm drain, in which the sea describes its drowning of the city, or see Nicole Doran’s “Holding on” (2017), a ceramic planter depicting a hand grasping a phallic cactus — reaching, as it were, for dry land. When I visited a week later, the rocks had become ophidian, snaking through the gallery in the shape of visitors’ footsteps. (Anthony Spinello, the space’s curator and owner, clarified that most visits to the gallery are by appointment, and the rocks are cleared per visitors’ needs.) 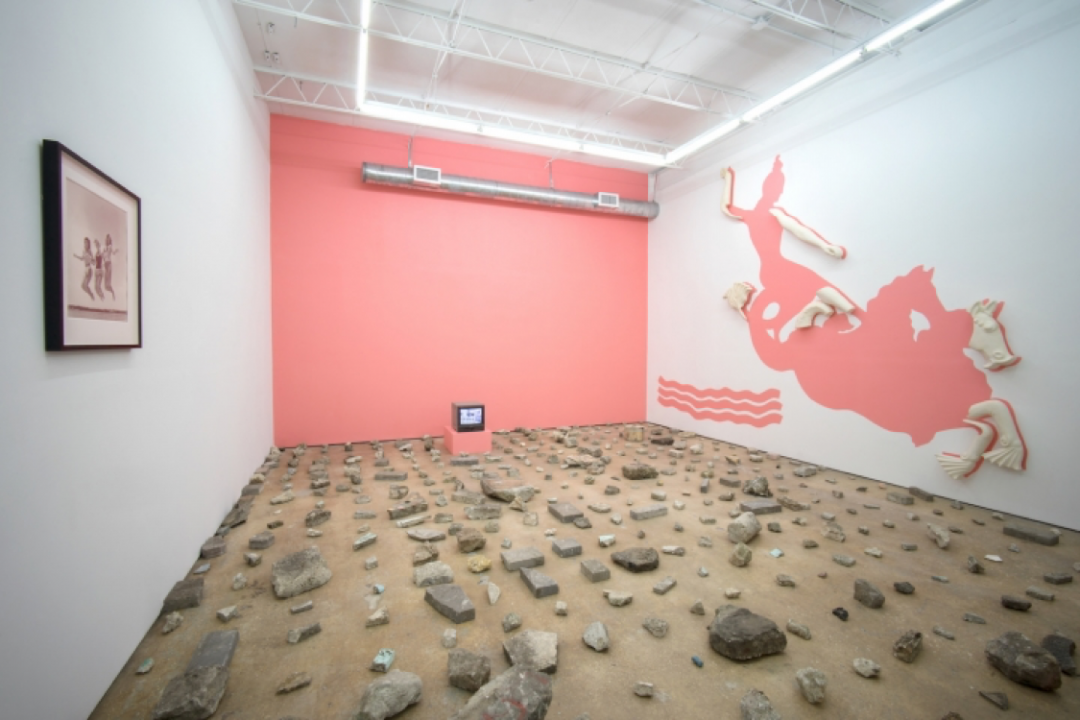 Like a womb, Miami is fluid and cyclical, and it transforms abruptly; Oliver Sanchez’s “My Mermaid Has Legs” (2017), which displays the molds used to restore a stone mermaid, has its own mythos. Sanchez and artist Kenny Scharf, recalling the mermaid’s former life — she once graced the façade of a now-defunct South Beach hotel — found and restored her, investigating her history with the help of old photographs and Miami fabricators. The mermaid (likely the Greek goddess Rhodes) now lives on the exterior of the Hermés store in the relatively new luxury Design District. As Sanchez explains in an accompanying text, Hermés is Rhodes’s “mythological partner … protector of eloquence and wealth. What better suitor to take my mermaid?” 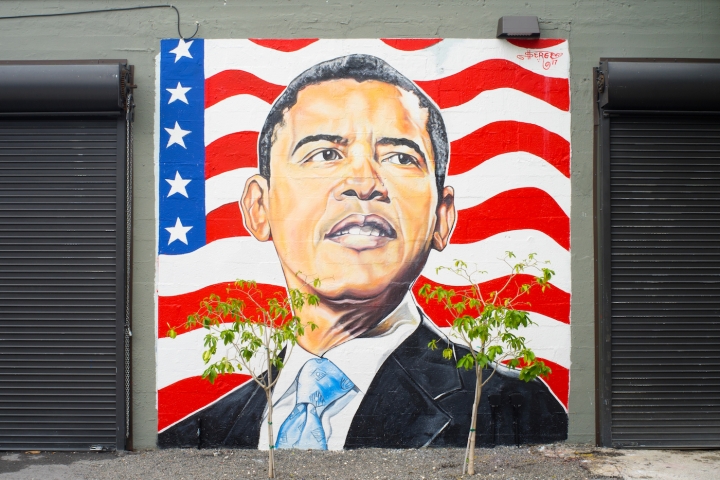 In his paintings of Little Haiti street scenes, Eddie Arroyo, too, addresses the city’s changing face; they seem to be made en plein air, neutral documentations with titles referring only to their location (“6116 NW 6th Ave, Miami FL 33127”). However, in painting traditionally black or Hispanic neighborhoods plastered with advertisements and construction cranes, Arroyo, like a Highwayman, might have the posture of an observer, but what he sees is not without socioeconomic and racial implications — and therein lies their strength. Still poignant are the collaborative works of Serge Toussaint, Little Haiti’s most recognizable muralist, and Michael Loveland, which combine Loveland’s abstract sculptures with Toussaint’s signature imagery: primary-colored, cartoonish, and visually synonymous with the neighborhood. At the gallery’s exterior, Toussaint has repainted his mural of President Barack Obama, which once graced nearby 54th Street. 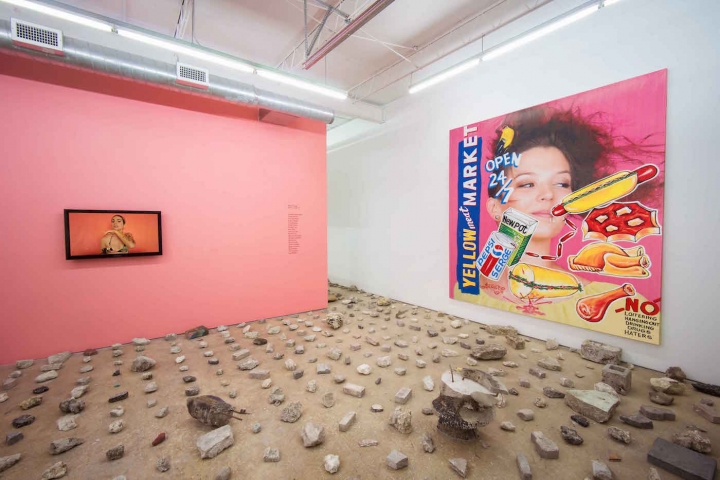 Their piece “Yellow Meat Market” (2015) features the Toussaint’s classic bodega iconography, this time totally ribald, with a hot dog leaking its condiments onto the lips of an unassuming model. Surely this is another Miami’s façade: its sexualization extends to its wetness, heat, the ascribed beauty of its inhabitants, the gross fetishization of its ethnic populations. “Misterio Tropical” (2016) a video by Angel Garcia, sits cattycorner to “Meat Market,” though you can hear it everywhere — its soundtrack is Cuban singer Willy Chirino’s “Soy Guajiro,” distorted past recognition. Garcia, Cuban herself, stares at us, doe-eyed and suggestively eating a mango, one of the most easily eroticized fruits. At once titillating and unsettling, her willingness to coyly “perform” belies her total, if momentary, control. The sexualization of crass cultural stereotypes further weaponizes them, and Garcia briefly upends their ultimately backward nature. It took a while for me to realize that the video was, in fact, literally backward.

As a Miami resident, I wonder if other cities lend themselves to a narrative that intersects sexuality, myth, and fears of a coming deluge, and I chide myself for romanticizing it, for seeking kernels of those themes in work by Miami artists. Of course, I do this partly because there’s verisimilitude to these ideas, but mostly because I feel the way about Miami that Sanchez does about his mermaid — that it’s beautiful, fragile, challenging to piece together, and worthy of altar-like reverence.