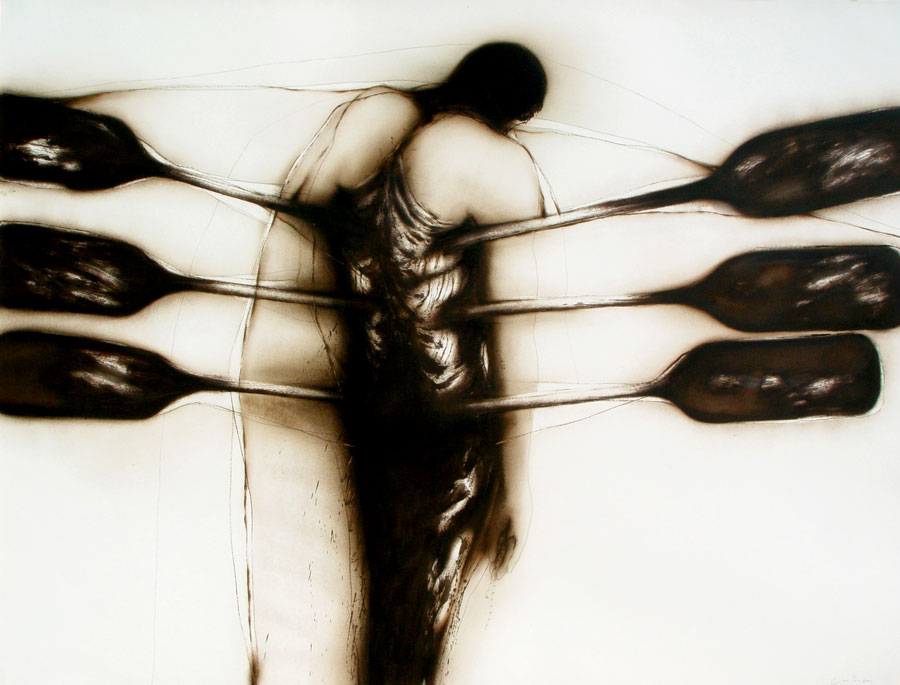 Cuban Artist Humberto Castro exhibits his work at Miami’s Calle Ocho in a show called “Draw- Wings: A Retrospective 1990- 2010”, which is just that, a retro- spective collection of drawings by the artist dating back to the 90’s that had not been shown in Miami since around ‘93. During a re- cent conversation with the artist, he tells me, “Yes, I have always liked to draw, but I did well with my paintings. Now I have gath- ered a compilation of drawings from 1990 to the present day and created this show at Cremata Gal- lery, which will handle my draw- ings from now on.”

“Draw-Wings…” is composed of a selection of works that Cas- tro created while living in exile in Paris, France (1980’s), along with other large format pieces done in Miami over more recent years. The series of mostly black and white works depicting visions of human figures reveals a different side to this well-known painter, a side he admits to be happy to show, “The public really likes my drawings,” he says, “and I like to draw! This is important because I like to vary.”

Of course, as new as this se- ries may be to us, it is not really “new” and is one that still con- tains what we have come to love about Castro the most, and that is his focus and manipulation of an imagery of the human body. The concept of man is one that has al- ways been at the foundation of his work, and that is satisfyingly obvi- ous in these re-emerging pieces; hints of solitude, and human dis- connect are incredibly present in these drawings – an issue Castro has expressed frustration with in previous works. It is the first time Castro has exhibited at a gallery in Calle Ocho. Usually show- ing his work in Coral Gables, the shift with his drawings into this historic Cuban cultural center is something that has the artist quite pleased; “I have been in Miami since 1990, so I know how this all began. It started with Coral Gables, but then spread to Calle Ocho, which lead to the Design District, and now Wynwood.

Up to this point, Calle Ocho has held its place in the more traditional realm of contempo- rary art. It would be wonderful for Calle Ocho to continue to shine at this cultural level and beyond.” Castro describes the opening of “Draw-Wings: A Retrospective 1990-2010” last month as incred- ibly interactive and exciting. The public’s response has been won- derfully positive and inspiring to the artist who had not thought of looking through his “archives” and displaying its contents sooner.

Little Havana’s first museum -El Museo de Little Havana-  is expected to open on Calle Ocho this winter. Admission will be free. Located next to the popular Ball and Chain bar, El Museo will be a permanent time capsule on the calle, preserving tales and artifacts of the three-square-mile neighborhood, which is home to not only Cuban exiles but also immigrants from Central … +

After wealthy widow Araminte hires young and lusting Dorante, secrets and lies accumulate as Dorante and his accomplice, Araminte’s manservant Dubois (Yves Jacques), manipulate not only the good-hearted Araminte, but also her friend and confidante, Marton (Manon Combes). Dorante, by turns pitiable and proficient, but always deferential to his social better, walks a fine line in his quest to arouse an equal … +

45 years after Pink Floyd’s David Gilmour filmed Live at Pompeii in the legendary Roman Amphitheatre there, he returned for two spectacular shows, part of his year-long tour in support of his No.1 album Rattle That Lock. The performances were the first-ever rock concerts for an audience in the stone Roman amphitheater, and, for two nights only, the 2,600 strong crowd stood … +

Set within the New York Hasidic community in Borough Park, Brooklyn, Menashe follows a kind but hapless grocery store clerk trying to maintain custody of his son Rieven after his wife, Lea, passes away. Since they live in a tradition-bound culture that requires a mother present in every home, Rieven is supposed to be adopted by the boy’s strict, married uncle, but … +

Gabrielle (Marion Cotillard) comes from a small village in the South of France at a time when her dream of true love is considered scandalous, and even a sign of insanity. Her parents marry her to José (Àlex Brendemühl), an honest and loving Spanish farm worker who they think will make a respectable woman of her. Despite José’s devotion to her, Gabrielle … +

Winner of coveted Rotterdam International Film Festival’s Tiger Award, Radio Dreams is the newest feature film from Iranian-British director Babak Jalali (Frontier Blues). The film creates the strange yet very real world of PARS-FM – a Farsi-language radio station broadcasting from the heart of San Francisco. The story unfolds over a single day as the station’s program manager, Hamid – a brilliant, … +