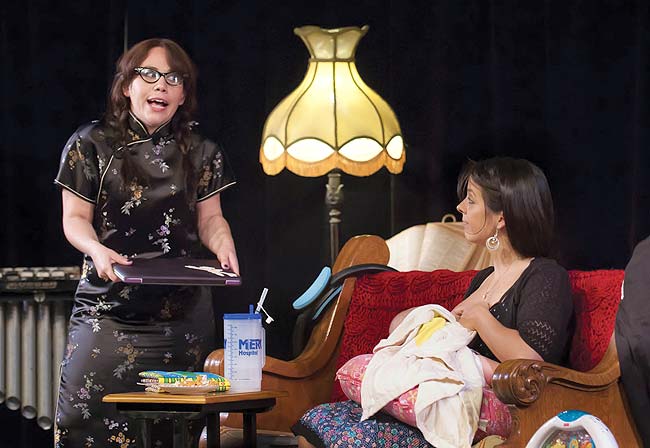 Miami’s Mad Cat Theatre Company is currently running its last show of the season, So My Grandmother Died, Blah Blah Blah, and it’s a real crowd-pleaser. Daringly blending a motley assortment of off-the-wall characters with a script that’s both emotionally deep and gut-wrenchingly funny, writer-director Paul Tei has yet again brought some new and wacky life to the city’s theater scene. If the opening night – as frenzied as the onstage performance – is any indication, this is one play that’s sure to turn a few heads.

Polly (Melissa Almaguer), a floundering comedy writer, makes a cross-country journey – from Hollywood, California to Hollywood, Florida – for her grandmother’s funeral, which she is to write a eulogy for. No surprise there. It’s the rest that surprises and titillates.

During the course of composing the eulogy, Polly’s tumultuous subconscious emerges in the form of a Greek chorus, composed of Anne (Anne Chamberlain), Ricky (Ricky Waugh) and Troy (Troy Davidson). With their help, the audience is taken through Polly’s troubled, yet often hilarious, situation, which stacks writer’s block, a recent breakup and troubled family relationships on top of her grandmother’s death. It’s weird, crazy and completely engaging.

The play is a personal one for Tei, stemming from a situation that closely mimics what Polly is going through. “I’ve been thinking a lot about death ever since I turned 40 and I’ve had a hard time grappling with it,” Tei says. “My godmother, who was 95 years old, passed away a little under a year ago. She was one of the last of my elders and it really brought up a lot of reflection about the passing of a generation, and that you’re getting older. For me, it was a play I needed to work on.”

Perhaps it’s that personal connection with Polly that enabled Tei to make her into such a real and relatable character, despite the fact that her inner thoughts take the form of a pirate (though, really, whose doesn’t?) among other recognizable characters. Then again, perhaps it’s all the pop culture bombs she drops throughout, some of which are more obscure than others – Hedda Gabler as opposed to Inception, for instance. What this boils down to is that Polly, as crazy as she comes off, is a strong enough character to hold the audience’s interest throughout, and that’s only one of the real successes here.

So My Grandmother Died, Blah Blah Blah explores the idea of coping with death, exposes the process of writing in general, and plays with the theme of deconstruction throughout. “You break something down to its core and then examine it to see if it can stand on its own.” These themes, important to Tei as well as Polly, become excellent points of reflection for the audience, which makes the play more than just a comedy, but also a close reading of an individual we can all find something in common with.
So My Grandmother Died, Blah Blah Blah, runs through September 10th at The Light Box at the Goldman Warehouse, the newly opened venue in Miami’s Wynwood Art District.