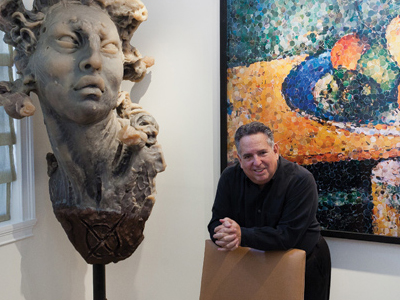 What makes a good work of art? Balance, composition, use of light, how the artist moves a viewer’s eye throughout the piece – any of these could strike a chord with enough people to create a general consensus of a piece’s distinction. To Harvey Oxenberg the most stirring aspect of art is its storytelling component, how art can – besides pleasing the senses – create a “leap in the imagination” by evoking a thought, memory or idea to the viewer.

“A piece of art and its buyer should speak to each other,” says the Miami art dealer. “Finding out what was in the artists’ mind during creation brings out a different perspective to the beauty of a piece and makes it more meaningful to the artist and the viewer.”

Capturing and conveying the essence and appeal of an artwork has become a trademark of the work of Harvey Oxenberg, who has been buying and selling art in Miami for the past four years. A New York-native, he moved to Florida in 1959 when his parents relocated for business. He worked for many years as the President/CEO of SeaSpecialties, Inc., a wholesale seafood processor and distributor in Florida, New York, and Pennsylvania. When the company was sold in 2005, the entrepreneur decided to reach out to artists he was familiar with and started representing their work. The shift in careers quickly paid off and Oxenberg Fine Art was established in 2007.

“Dealing art almost always involves a happy sale, different from what I was doing before, where I had no actual contact with the end user and the purchase was a necessity,” says Oxenberg. “Buyers of art fall in love with it, want to know where to place it, when to get it, when to pay for it. The whole sales process is very rewarding.”

“My approach to selling art is first to make certain the buyer loves what he or she is buying, and that he or she is getting good value,” he said. “Conversely for a client who is selling, the most important thing is that he should not suffer from seller’s remorse.”

Oxenberg says that the social component is one of the greatest motivators in his work. With his partner Nory Contractor, he attends auctions in New York in the spring and fall and about eight art fairs a year, including Art Chicago, ArtHamptons, and Shanghai Art Fair. A member of the Wynwood Art Association and Nada (New Art Dealers Alliance), he keeps a close relationship with other art dealers, and regularly partakes in local museum activities.

Himself a collector for more than thirty years, Oxenberg also uses his home in Coconut Grove for exhibitions and views of his private collection. What began “with two limited edition photographs by Bruce Weber of a beautiful Brazilian couple” has steadily expanded over the years, presently consisting of an assortment of seventy pieces, including large stone head carvings by Joseph Wheelwright, several photo interpretations by Vik Muniz, a mixed-media piece by Daniel Arsham, and sculptures by Javier Marin from Mexico.

Oxenberg confesses that collecting art is “very addictive,” but is consistent about putting some of his own pieces for sale, as he does not believe in storing art.

Idiosyncratic drawings by Elizabeth Murray, a beautiful acrylic cube piece by Teresita Fernandez, bronze sculptures by Manolo Valdez and Robert Graham, the Black Supper by Andres Serrano, a painting by R. B. Kitaj and a very well known photograph by David Drebin in a light box are also part of his eclectic collection.

“There’s great potential in the Miami market – a lot of people are coming in to buy,” he noted. “Because it’s warmer and people can come on vacation, they are happy, want to shop and buy art. The whole environment is inspiring.”

“One thing pressing about the Miami art community though, is that it needs to be more cohesive. In New York galleries open and close at the same time and Miami needs to offer that regularity and reliability to sellers and buyers.”

However, as interesting and profitable as selling is, Oxenberg says his broader intention is to help sustain artists in their profession. For the last year and a half he has served as the President of the Bakehouse Art Complex in Miami, a non-profit facility providing workspace and exhibition opportunities to more than seventy emerging and mid career artists.

Rainer Lagemann, a German sculptor who found Oxenberg through an ad on Craigslist in 2009, says that an art dealer/agent can help an artist fulfill his needs in terms of time and the freedom to make things happen. “You could be dealing with the best gallery in New York, but if they don’t pay you, it is not worth it,” says Lagemman, alluding to cases where art dealers and galleries were charged for fraud schemes. “A serious representative is one that after selecting and artist – at least initially -, will not want him to pay for anything.”

“It is really a whole set of skills rolled into one what allow us to do what we do,” says Lagemman who before working as a full-time sculptor, ran a retail store specialized in the import of modern European furniture. He explains that the main factor in Oxenberg’s successful leap from the business world into the art world is that it all really goes beyond just finances. “I get to create what I want and Oxenberg only represents what he likes,” he said. “That makes all the difference – being true to oneself.”

Lagemman moved to Miami from the Bay Area in 2008 looking to gain exposure in the Florida art fairs scene. He says his business relationship with Oxenberg has provided him an introduction into an even bigger art network. Oxenberg negotiates the complexities of business agreements, handles the day-to-day details of his career, and finds different venues for his work. Lagemman’s stainless steel pieces are priced from $5,000 – $12,000 and consistent sales have allowed him to make time to also create pieces for himself with no commercial value.

“His friendly approach has also been a comfort,” notes Lagemman. “I only work with people I like on a personal level and Oxenberg has been more than once a source of advice and even a shoulder to cry on.”

Barbara Cole Lee, owner of bclee+company and art consultant for commercial and residential uses in Boston is one of the buyers who became familiar with Lagemman’s work through Oxenberg during the 2010 Art Basel Miami Beach.

“The role of a good dealer is to educate as much as to sell,” says Lee. “Art fairs have a lot of adrenaline, a blend of well-established and emerging artists, and a crowd where people share the same passion. You can learn so much about art from them!”

“If a dealer is passionate about the art they represent, he or she will walk you through a show and give you a better sense and understanding of it.”

An art collector for over 25 years with her husband, Lee designs art spaces, purchases and installs art for large multi-use office buildings, high-end apartment complexes, corporate and executive offices, and personal residences. The three pieces she bought by Lagemann – human climbers in metal – will be incorporated into an office space to make it a more uplifting environment for employees.

“Oxenberg was key in making me take a second look at Lagemann’s work and the whole sale process,” says Lee. “Some art dealers just want to pass the art along but he was also very responsive, called back right away, and helped with the commission and the deadline. Perfect shipment, a sincere appreciation for the buyers, those are all details that make you feel like you are a partner with the dealer and artist – and that makes all the difference.”

A business professional for many years before shifting her focus to art, Lee added “working with art, like many things, is not just about looking at pieces all day long. One needs to know about business, be technology-savvy and have good negotiation skills.” Harvey Oxenberg seems to have all of the above on his side.