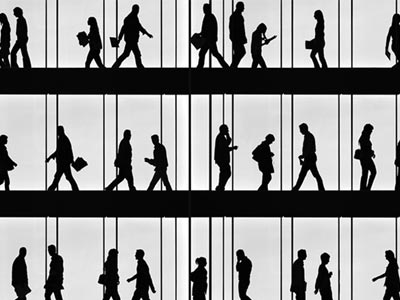 Since photography’s earliest inception in the 1800s, the questions of modern life in the city have been addressed. The first known photograph including a person was taken by Louis Daguerre (the inventor of the Daguerreotype), on the Boulevard du Temple in Paris circa 1839. In that photograph, the figure on the open promenade appears to be a tiny thing in the midst of a bustling, modern city. Two centuries later, contemporary photographers have grappled the subject of humans’ interaction within the city. But the solo show of Parisian born and based photographer Jean-Pierre Attal at Waltman Ortega Fine Art in Wynwood seeks out something new: the innate, idealist desire for the city and the human being to peacefully coexist.

The French-Russian combination of Olivier Waltman and Aliona Ortega has brought a steady series of critically strong, engaging exhibits to Wynwood since its opening in October 2010. For the first time, the gallery will exclusively feature works created over a period of ten years and roughly four to five different series of works. For over fifteen years, Attal gained his practical experience in the arts as a documentary photographer. Over the course of a decade, he has amassed an impressive exhibition history, specifically in the art fairs and emerging international biennial arenas. His photographs have shown at the Festival of the Image in Les Mans, the Biennale d’Issy (2009), the Thessaloniki Biennale and have continuously been displayed with Waltman Ortega at Art Paris, Art Chicago, Art Miami and Photo Saint-Germain-des-Près.
The small, but pristine space of Waltman Ortega houses Attal’s works, brilliantly presented in diasec casings. A pointedly quiet, undramatic sensation permeates the gallery upon entering. Flashes of black and white with intermittent specks of color constitutes the first impression of the show. Upon viewing each work, though, there is a sweeping, almost dizzying rush of historical, critical and psychological references that are drawn out which takes more than just seconds to fully digest.
In the spirit of Alfred Steiglitz, Eugène Atget, Bernd and Hilla Becher and Walker Evans, Attal seeks out and problematizes activity within the sphere of the “everyday.” Contemporary photographers within the same vein, including Philip Lorca DiCorcia, Nan Goldin and Finnish virtuoso Esko Männikkö have tendencies to freeze not only the subject but also the viewer in their powerful works. In a new direction, inspired by those celebrated personalities, Attal pushes the documentary photography a step further as he adds splashes of vivid color or exquisite natural markings (just out of reach to be reproduced by the machine, alone) to his works; a collared shirt, a coffee mug, an office party or an exuberant phone conversation. This small, but significant addition of detail avoids the inkling of haphazard snaps of a tourist or curious passer-by.

Attal’s works entitled Code from the series “Elementary Particles” show hand and fingerprints enlarged over the entire span of the image, overlaid with black and white stripes resembling those of a manufacturer’s barcode. In the new millennium, the simple (but ideologically loaded) act of documentation would seem completely appropriate as each work acts not only as a form of identification, but signifying the troubled nature of modern identity, itself. Key words which often coincide with singling out individuals; fingerprints, living space, final destination and occupation are intertwined with Attal’s renderings. The delicate folds of skin and life-size ridges of the fingertips prevent the image from being categorized as a bureaucratic record. Other works see indiscriminate computer matrices and the same barcode lines sprawling across images of moving crowds.

Strictly translated, “Alvéoles” means “cells”. In this setting, however, Attal prefers the inference of the organic “honeycomb”. Each work is a straight-on view of workers in a metropolitan high-rise. Some windows are wide open, others half-shut, a few totally obscured. The voyeuristic approach is slightly softened in these images. Rather than playing the intrusive or sinister visual agent cataloguing a static scene, Attal captures his subjects in motion and is keen to select images free from, at least outwardly, reprehensible acts. He filters his work to reflect the breakneck pace of modern life but appears to enjoy a solace, even a tinge of admiration in the persistence of the little figures. There is a degree of contemplation versus condemnation in the hurried, crammed and pre-manufactured environments Attal considers; the presentation of each photograph literally shimmers behind the diasec mounts, enhancing the color contrasts. Ironically, the total effect is one of a natural panorama, produced in the factories, human resource centers and homes of the people who populate them. Steel, glass, concrete and iron trappings would conspire to swallow these tiny urban ants whole, with an even greater threat of its implications of emotional death at the hands of the worker lifestyle. Attal makes sure that feelings do exist in these endless corridors and cubicles, reminding his audience that flesh and blood is the ultimate source of the faceless leviathan of “business”.

Humanizing an inescapable system of numbers, deadlines, projections, results and expectations is only the first step for Attal. The larger goal appears to be the insistence that organic, subjective elements persist in a fiercely mechanistic life. Bridging the gap between man and machine has been an untouchable aim for generations of contemporary artists, wrestling their own demons and histories to try and deliver a potent statement of our status. Attal orchestrates visual triggers rooted in geometric abstraction, typology and classic documentary photography to exorcise the “ghost in the machine”, so to speak. We, the people, are the “ghost” to the urban jungle’s “machine”. There is a noted emphasis on the actual architecture of this ephemeral “business world.” Attal’s earlier series, with titles such as Social Consulting, Human Resources, Business Impact and Empty Architecture hint at his concern with the pre-fabricated state of modern life intruding on a fluid, vibrant human existence. Attal seamlessly integrates these two seemingly incongruous worlds with clarity and self-control. There are no angry statements, no subliminal messages to be found here. Only a cleanly presented collection of photographs initiating a conversation about our engineered agencies, public meeting areas and mobile technology. He may possess a single-track approach to these issues, but the visual results are remarkably diverse. The glow of office lights at night, animated phone conversations, a hint of a tree or foliage indoor: all unobtrusive elements to the larger compositions but permit the viewer not to be drowned with hopeless melancholy.

We would like to believe that expression distances us from nature; while animals’ instincts and routines might drive them to react in ways we can relate to, it is our ability to create and recreate what distinguishes us from a rampaging buffalo stampede or a pulsating beehive.

Attal’s high-definition photography draws interesting parallels between human activity and biological frameworks. At the same time, he ensures that a critical perspective on distinctly human activity ensues; we might buzz about in our workspaces, our homes and our varying modes of transit, but at day’s end, we are unique beings whose emotions simultaneously quantify and qualify. There can be no doubt that engaging with Jean-Pierre Attal’s photographs bring life into what is pointedly monotonous, dull, inhuman.