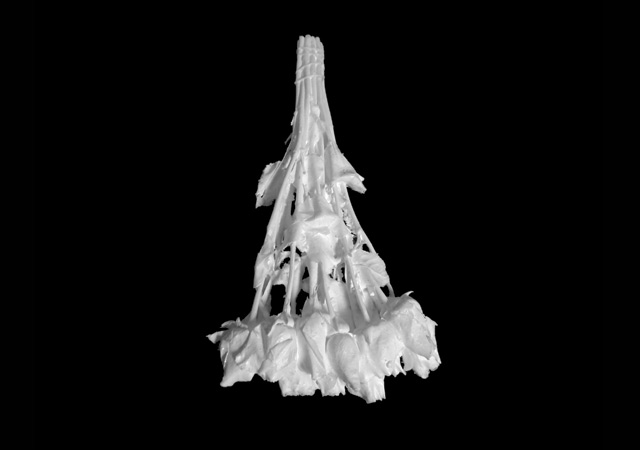 For all of the inherent value laden in the masterpieces of Modern and contemporary art, there is something menacing going on beneath the surface. The public rarely, if ever, knows the scope of scandal, underhanded dealings and boldfaced deceit carried out, while dealers and auction houses cash in on the public’s money. Such appropriate timing for these questions to bubble to the surface in the wake of the Occupy Wall Street movement; how does the business of fine art somehow leave the lowly hands of its creators to reach their ultimate end in the pockets of the elite? Moreover, does the process morph these high-profile personalities beyond their own humble origins into something untouchable…even sinister?

“Here Lies Georges Wildenstein” is a richly curated sensory bombardment at Primary Projects, the alternative gallery program of Miami’s groundbreaking, street-level initiative Primary Flight. Its title recalls the name of the iconic dealer and researcher Georges Wildenstein whose family has, inarguably, steered the course of the sales, valuations and connoisseurship of the 20th century’s most precious works of art. Yet, their legacy continues to be tainted with grave allegations of Nazi collaborations during World War II and depriving devoted patrons of their masterpieces, by means and motives seemingly geared towards nothing but the pursuit of pure power.

The metaphoric double-edged sword of luxury and darkness alongside beauty and evil is laid before the viewer in this clearly fearless effort from Primary Projects: artists visible on the international contemporary stage including Miru Kim, Retna, Marc Bijl and Shelter Serra are featured with some of their most challenging visual explorations. Kim mingles with a group of live pigs fully nude, bringing her body into contact with skin and being of an animal known for its aggression and its inevitable consumption. Retna’s lyric alphabet inspired by Old English script, Eastern text informed by the hard spirit of the streets of Los Angeles illuminates expansive surfaces. Concepts of brutality, mass marketing and the hypocrisy of the institution are stripped bare by Bijl, Serra, Kenton Parker and Nigon using active installation and highly specific sculptural gestures. Exquisitely rendered drawings and traditional painting thinly veil societal grotesquery thanks to Christina Pettersson, Manny Prieres, Scott Shannon, Michael Vasquez and Cleon Peterson. Multidisciplinary Miami veteran George Sánchez-Calderón delivers a highly personal memorial sculpture as well as a grandiose, glittery schooner Xerox, which rounds out an exhibition that will surely bring an audience to its knees.

Like a coat of crude oil over a jeweled Fabergé egg, “Here Lies Georges Wildenstein” screams decadence and defiance, with a level of spatial and compositional discipline. Primary Projects has, in a weird and wondrous way, echoed the self-made art mogul: a dark history with a glossy finish.