Thoughts of a painter. 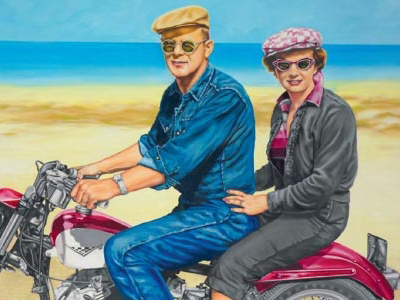 “Everything done with honesty should be admired, or at least deserve a few minutes of observation.” Thus begins a reflection by Raul de la Nuez about his inseparable relationship with art. “We artists enjoy life in a very peculiar way. We don’t see green or blue or black and white, but all the tonalities of green, the nuances and contrasts. We see shades and lights, brightness and mixed colors diluting and vanishing into the distance. We enjoy landscapes more intensively.”

Raúl de la Nuez is an experienced artist who has settled down in Miami, where he has his home, his studio and, more recently, his own gallery. He was born in San Antonio de los Baños, a town near Havana, Cuba, full of poets, draftsmen and troubadours, in a home where cultivating friendship and a garden of exotic plants – which had more than 5,000 varieties of cacti – were the most important features. “It was a paradise of thorns, without metaphors,” as described by a Cuban poet while visiting the house.

“For me, life is a process of constant observation, of sharpening my vision and retaining the images. It is about being able to summarize, memorize, resume essences and transform the three dimensions around me to a bi-dimensional space. I represent life in a horizontal or vertical format, translate it into symbols, lines or colors that nurture me, which in turn inspires me to bring into the canvas and share it with other people.”

Nuez began to paint at age 12, under the supervision of Impressionist master Rubén Suárez Quidiello, who warned him seriously: “When you choose this vocation, it’s for life. If it is authentic, then you have found your reason for being.” This is how that bohemian master lived and died, and also how his disciple’s life continued. Early in his life, Nuez defined his vocation and devoted his youth to study painting. Soon after finishing school, he was full of projects and exhibitions, which led him to his second profession: art direction for movies and television.

Nuez admits that he doesn’t live out of painting but that his painting is alive thanks to him. Thanks to his works as Art Director – Nuez has his own gallery at Calle 8 where he shows his most recent productions. He now enjoys the freedom to carefully plan every single aspect of his exhibitions, which the artist takes not only into the canvas but also into different elements around the gallery.

Man on the Road

Man of the Road is Raúl de la Nuez’ most recent exhibition. It is a tribute to the 60’s and 70’s art, to pop art and photo-realism. According to the artist, the iconography in his works is inspired by his times as a student in Cuba – times when pop icons such as The Beatles and Harley Davidson motorcycles were representations of the enemy and long hair was considered inappropriate. His paintings are loaded with the nostalgia he felt then for an alien and fascinating culture – as fascinating as most things that are forbidden -.

Today, Nuez lives and works within that same culture and freely inspires himself with the remnants of the rock and roll era, the civil rights movement or Easy Rider.

His portraits of bikers, drawn in carbon on canvas, show his obsession for recovering that imagery for his paintings and for himself. Classic Rock and roll imagery was left behind by the mainstream media long time ago, and the music that accompanied them is now denominated “oldies”. Only scattered pictures and grainy videos endure in the memories of who actually lived through those times. Raul de la Nuez was in Cuba then, but in his mind, he was here. Man on the Road has been shown in Cafe Amparo Gallery, in Puebla, Mexico and will be presented in Galerie D’Aguesseau, Paris, France.

“Painting is a complex exercise. Within the confines of a canvas there are as many laws as in a Civil Code: those of composition, balance, rhythm, the relationship between lines and color… and the subject to be represented. Where do I make the viewer starts seeing the painting and where am I going the lead him? I want the viewer to engage with my art, to perceive it as a chronic of our times. Being an artist implies commitment. We are not gifted beings with some kind of supernatural skills or intelligence. What artists do should be aimed at sharing it with others. I feel a strong committed to interpret life. The more different cultures that I could learn from and relate to, the more universal my art will become.”