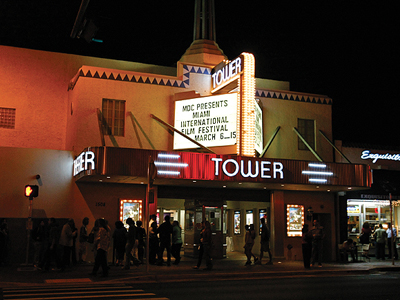 When asked to consider the state of cinemas in Miami, the first thought that comes to mind may be a strong visual like the following: a crowded theater of noisy adolescents, feet firmly planted against the rear of your seat, reveling in the ear-shattering, violent explosions of the latest Hollywood blockbuster, probably directed by Michael Bay. Somewhere in the theater, a child wails. Elsewhere, an overpriced jug of soda crashes to the floor, destined to become a sticky mess. And all of this for the whopping price of $10 per ticket.

Of course, not every experience is like this, and some people may even find the aforementioned scenario to be an example of a good time. Those looking for an alternative, however, can find one tucked away on the vibrant cultural strip of Little Havana known fondly as Calle Ocho.

The Tower Theater was erected when Miami was in its infancy, opening its doors in December of 1926. At the time, it was heralded as one of the finest theaters in the Southern United States, with all the state-of-the-art equipment necessary to best deliver fresh additions to the fledgling film medium. When its marquee lit up, locals flocked to it as sure as a moth to a flame.

It wasn’t until the 1960’s that the Tower Theater would become most intimately tied with what we think of today as a major part of culture in Miami. It was during this time when many Cubans were fleeing to Miami in the hopes of starting a new life. “The Tower Theater was the first movie theater that Cuban exiles went to,” says Orlando Rojas, manager and film programmer for the theater. “Today it is still, in a different way, their theater.” While in the past it offered an introduction to American culture, today it strives to offer not only Cubans, but Latin Americans of various nationalities, glimpses into the films being produced in their home countries.

In 1984, the theater closed its doors and remained dormant until the City of Miami, who owns the building, decided to reconstruct, renovate and reopen it to the public in 1999. After changing hands a couple of times, it finally fell, at the end of 2001, under the care of Miami-Dade College (MDC). Rojas, a filmmaker from Cuba, took the reins at that time and has been putting together the theater’s quality alternative programming ever since.

Though the theater strives to showcase as many contemporary Latin American films as possible, it doesn’t shy away from films composed in other countries. In fact, it welcomes them. Recent examples include Air Doll, the fairy tale story of an erotic blow-up up doll who gains a soul and explores the world around her, and I Am Love, which follows the lives of a bourgeoisie family whose twists and turns are at the whims of undiluted passion. These come from Japan and Italy, respectfully, and the Tower Theater was the only location in Miami to screen them, and for nearly half the ticket price of theaters like AMC.

When visiting the theater, the crowd that attends screenings will often vary depending on not just the content of the film, but also on the director and the country of origin. This may seem like it goes without saying, but in the case of this theater it is important, because crowds of like nationalities and cultures seeing a film together is the perfect example of how the theater acts as a cultural magnet and gathering place. It is able to bring together members of the individual communities of Miami to experience something from their unique points of view. When people from outside those communities share in the viewing of a film, it fosters a true sense of community.

“The theater acts a bridge between the many cultures, age groups and demographics in Miami,” says Rojas. In truth, he reveals, “There are very particular audiences that come on certain weekends and for certain films.”
What attract these audiences are films that depict familiar homelands or exotic locales, and tell a story that is easily relatable. They are stories that strike straight to the heart without relying heavily on special effects or extreme violence. Emotional, passionate and, most importantly, human stories are what people flock to see at the theater. In order to be shown here, Rojas makes sure that a film fits these requirements in addition to being a foreign film, with few exceptions.

These exceptions occur mostly when the theater draws on local talent for work. “We would like to give local filmmakers a place to show their films,” says Rojas, “and to show audiences that these films are very important to the development of local culture.” The number of local films may not compare to the amount of foreign films shown at the Tower, but when the theater does hold a premier it is often for the best films Miami has to offer. These special events are a must-see for anyone interested in the work that is coming out of Miami.

These are not the only events that are held at the Tower Theater, though. In fact, there is a hefty roster of other special screenings and showcases that pepper the theater’s calendar.

For glimpses into the latest and boldest works from around the world, consider attending a screening linking up with one of the many film festivals that use the Tower Theater as a venue. These occur regularly throughout the year in an attempt for the theater to partner with others to bring great films to the attention of a wider audience.
Some of these festivals include the Miami International Short Film Festival, the Cuban Film Festival, the Hola Mexico Festival and the Miami International Film Festival. The latter works very closely with the Tower Theater every year, because they are both managed by MDC.

The Miami Gay and Lesbian Film Festival has operated in the city for thirteen years, exhibiting LGBT-related films throughout late April and early May. Last year, it made the decision to show films at the Tower Theater for the very first time, in addition to its traditional venues in Miami Beach, Downtown, and North Miami.

“We had been curious about it for some time, but weren’t sure if it would be the right fit for our audience,” says Kareem Tabsch, the festival’s program director. The decision was eventually made to show films at the theater for three days. “It was a great inroad to reaching a different audience than we had in the past and accessing people who may not have wanted to travel all the way to the beach. A lot of our audience went there for the first time and the feedback was great. We were really pleased with the way it turned out.”

When it comes to focusing entertainment on particular nationalities or cultures, the Tower Theater is not the only organization in Miami to do so. The city has its fair share of cultural clubs and societies that assemble events for their target audience. Rojas has recognized this and made intimate pacts with a few in order to bring cinematic events outside of the film circuit that pertain to specific nationalities.

Throughout the year, special film collections are presented to audiences in order to broaden the scope of cinema in Miami. For example, once a month throughout 2010, the Societa Dante Alighieri, Miami’s Italian culture society, showed classic Italian films at the Tower Theater. They charged nothing for these screenings and requested only a small donation for the society. As anyone in Miami knows, it’s hard enough to find a free event worth going to, especially one that directly benefits the broadening of cultural awareness, instead of just a tolerance for alcohol.

“I believe it is important to have very challenging films,” says Rojas. Every week, new films are scheduled that continue to be just that. It is rare to find anything flippant or shallow in the Tower’s cinematic roster, which aids its endearing personality. When asked about what the future brings, Rojas specifically states, “We are planning to show a remastered 35 mm print of La Dolce Vita, by Fellini.” This dip into Italian film history is an addition to the Theater’s continuous scouring of the earth for films of relevance, poise and, above all, cultural awareness.

Little Havana’s first museum -El Museo de Little Havana-  is expected to open on Calle Ocho this winter. Admission will be free. Located next to the popular Ball and Chain bar, El Museo will be a permanent time capsule on the calle, preserving tales and artifacts of the three-square-mile neighborhood, which is home to not only Cuban exiles but also immigrants from Central … +

After wealthy widow Araminte hires young and lusting Dorante, secrets and lies accumulate as Dorante and his accomplice, Araminte’s manservant Dubois (Yves Jacques), manipulate not only the good-hearted Araminte, but also her friend and confidante, Marton (Manon Combes). Dorante, by turns pitiable and proficient, but always deferential to his social better, walks a fine line in his quest to arouse an equal … +

45 years after Pink Floyd’s David Gilmour filmed Live at Pompeii in the legendary Roman Amphitheatre there, he returned for two spectacular shows, part of his year-long tour in support of his No.1 album Rattle That Lock. The performances were the first-ever rock concerts for an audience in the stone Roman amphitheater, and, for two nights only, the 2,600 strong crowd stood … +

Set within the New York Hasidic community in Borough Park, Brooklyn, Menashe follows a kind but hapless grocery store clerk trying to maintain custody of his son Rieven after his wife, Lea, passes away. Since they live in a tradition-bound culture that requires a mother present in every home, Rieven is supposed to be adopted by the boy’s strict, married uncle, but … +