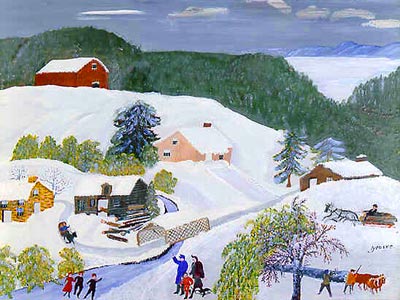 The John and Mable Ringling Museum announces a solo exhibition honoring one of America’s most celebrated folk artists, Grandma Moses, in Grandma Moses: Grandmother to the Nation in the Ulla R. and Arthur F. Searing Wing.

Grandma Moses, born Anna Mary Robertson Moses, began painting at age 76, when her hands became too crippled by arthritis to do embroidery. At the age of 78, she held her first exhibition at the Museum of Modern Art in New York City. During her 101- year-life Grandma Moses painted over 1,000 pictures, 25 of them after her 100th birthday.

Drawing from memory and the landscape of upstate New York for subject matter, Grandma Moses’s paintings are icons of the simple life. The subject of her paintings range from the calmness of the season’s first snow to the excitement and anticipation of spring’s arrival in rural America, and often include farm animals, barns, sleighs and people.

This general heartiness of subject matter and the optimism and sense of comfort they provide often led critics to label Grandma Moses as a folk artist; however Moses was the darling of New York galleries and Washington politicians. She achieved immense fame during her artistic career, crafting a popular reputation that carried her far beyond her upstate New York village. Her biography as a farm wife painting at her kitchen table was endlessly repeated, and she made public appearances at department stores and cooking contests.

The exhibition is comprised of approximately 40 works – including 25 paintings and several of Grandma Moses personal items such as her wicker rocking chair, a pin cushion with beeswax, and a variety of painting supplies – and represents several themes including Regionalism, Women’s Work, the Cold War, and also Grandma as Celebrity.