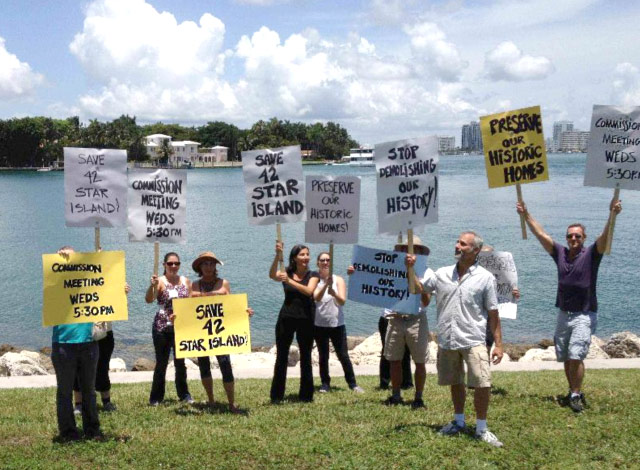 The month of July was a turbulent one for Miami Beach historic preservation. While the wide spread destruction of historic homes continues unabated through out the city, Miami Design Preservation League’s continued efforts to keep a bright light on this issue has helped create some positive results.

The City Commission responded to the urgency of the problem at its July meeting and voted to move forward with an ordinance that will temporarily halt the issuance of demolition permits for pre-1942 architecturally significant homes. This was an important step and will give everyone concerned a chance to consider fair options to maintain the character of our residential neighborhoods and respect the rights of homeowners and their neighbors.

We applaud the ordinance’s sponsor Mayor Matti Bower and the commissioners who supported the measure.

At the same meeting, the City Commission also recognized the importance of offering incentives to homeowners to help them should they decide to preserve their houses. A new ordinance, written and supported by the city administration, contains creative ideas that will further the preservation of historic homes.

Combating the demolition of historic homes and the spread of McMansions destroying the character of the city is a difficult and complicated undertaking. MDPL is currently studying what has been done successfully in other parts of the country. These solutions will be part of the discussion that the Planning Board and City Commission will be consider in the months to come.

August 27: Planning Board will consider the ordinance to temporarily halt the demolition of pre-1942 architecturally significant homes.

September 24: Planning Board meeting to consider out-of-scale construction in residential neighborhoods and preservation of historic homes.

In the meantime, MDPL continues to persevere in its efforts to save the historic home at 42 Star Island. An appeal of the Design Review Board’s decision to allow demolition has been filed with the courts. We are hopeful that this course will stop the senseless demolition of what has been called Miami Beach’s most prominent home.

MDPL has been successful in these efforts because of the support of its active membership. Your emails and presence at city meetings has helped in important ways. The City Commission and Administration has heard the voice of concerned residents and change is on the horizon.

William H. Bradley was America’s foremost graphic artist from the end of the nineteenth century into the 1930s. Derived from the Art Nouveau aesthetic, the flowing lines of his designs for advertisements, periodicals, catalogs, and posters made a marked impact on both commercial and fine art in the United States. The Wolfsonian–FIU Museum 1001 Washington Avenue Miami Beach, FL 33139 305.531.1001 www.wolfsonian.org

This exhibition showcases the Spring/Summer 2016 collection of Fashion designer duo Abdul Abasi and Greg Rosborough inspired by East-West/West-East, a public art installation of bronze monoliths by Richard Serra in the Qatari desert. As colors and textures in the garments communicate this unique life experience, their collection is a perfect embodiment of public art inspiring the creative economy. In a recent New … +

From the Jane Gershon Weitzman Collection, Art & Sole: Fantasy Shoes features over 150 of the most inventive examples of these fantasy art shoes, remarkable for their imaginative construction and elaborate adornment. Art & Sole exhibition was curated by Jane Gershon Weitzman. Shoes are constructed of unexpected materials such as bronze, ceramic, wire, Plexiglas or in the case of Robert Steele, corrugated … +