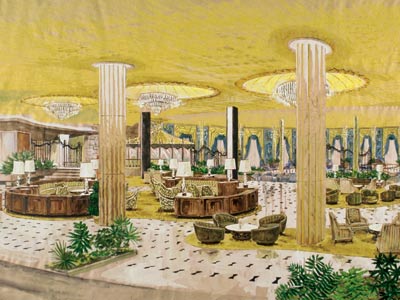 The mid-century was a time when Miami fully developed as a “modern” city and established itself not only as a glamorous escape destination, but also as a desirable place to establish a home. This evolution was consciously created and molded by talented designers such as Alfred Browning Parker, Morris Lapidus, George Farkas, Frederick Rank, Kay Pancoast, and Fran Williams, whose collective vision of our city shaped the indoor-outdoor lifestyle for Miamians. Although the designers and architects of mid-century Miami are widely known, the craftsmen of decorative arts have been largely forgotten. Promises of Paradise will be the first exhibition to showcase their efforts and contributions to mid-century design.

Through an extraordinary selection of more than two hundred objects from sixty lenders, the exhibition showcases architectural designs, furniture, textiles and decorative arts. It also incorporates a wide range of interdisciplinary fields such as architecture, history of design, city planning, historic preservation, historical studies and tourism management. Promises of Paradise is curated by Allan T. Shulman, Guest Curator of Architecture and Urban Planning; Thomas Hine, Guest Curator of Design, Decorative Arts and Popular Culture; and Ruth Grim, Acting Curator in Charge at the Bass Museum of Art. Organized by the museum, the exhibition is accompanied by a 360-page book titled Miami Modern Metropolis, highlighting architecture and design at mid-century, which will be released in March 2008 and available for sale at the Bass Museum Shop.