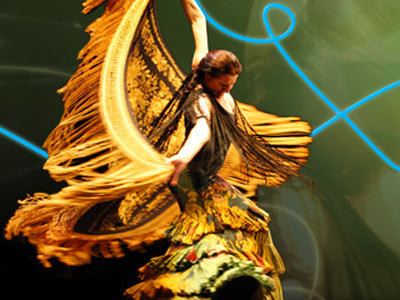 A dynamic and eclectic blend of dance, theater, and conversations with Festival artists takes center stage October 8th through 11th at the Ringling International Arts Festival. Eleven performances by emerging talent from Florida State University and Sarasota, along with a series of discussions with guest artists are presented in the 200-seat, performance/dining pavilion erected especially for festival’s inaugural year.

“It was inevitable that once we started planning our core programs and exhibitions for the launch of the Festival, that we would also start thinking about a festival fringe,” says Dwight Currie, Associate Director of Museum Programs at Ringling. “When one thinks of major festivals such as Spoleto Festival in Charleston, SC. and the Edinburgh Festival Fringe in Scotland, it is often the fringe – those ancillary events taking place all over the city – that add special excitement and help make a festival thrive and grow.”

The Festival Cafe is a first-year effort to launch a more extensive roster of independent offerings for the 2011 event.

Leading the line-up on Thursday, October 8th, is a series of “Short Scripts;” one-act and 10-minute plays written by students of the FSU Master of Fine Arts Writing for the Stage and Screen program, showcasing the talents of a troupe of 17 directors and actors from the School of Theatre.

At Noon and 6:30 p.m. One-act drama, An Drochshaol by Marla J. DeMont is onstage.

At 4:00 p.m. Series of three powerful 10-minute scripts: Previously On by Beau K. DeMayo, Too Long at the Fair by David B. Whitmore, and The Wilderness by David Saint.

4:00 p.m. Michael Donald Edwards, Producing Artist Director of the Asolo Repertory Theatre engages Michael Pennington, star of Love is my sin in a discussion of Love in Our Time and Shakespeare’s Sonnets.

Performances from one the top university dance programs in the nation are featured when FSU Dance takes the stage on Saturday, October 10th. The troupe of 12 dancers will present five works at noon, 4:00 p.m. and 6:30 p.m. Of Love by Gerri Houlihan, Passage by Jessica Mayhew, Sometime Grace Whispers by Jawole Zollar, Sarajevo by Rick McCullough, and Love Reddy by Elizabeth Ross.

More dance is featured on Sunday, October 11th when Moving Ethos presents performances at Noon and 4:00 p.m. The Sarasota-based contemporary dance company is under the direction of Courtney Smith (recipient of the 2008 John Ringling Artist Fellowship) and Leah Verier-Dunn. The seven-member company will present 7 Rotating Vortices of Subtle Matter by Smith and Verier-Dunn.

Presented at Noon, 4:00 p.m., and 6:30 p.m. will be the one-hour performances at the Festival Cafés are free with Museum admission and offered in an informal setting to give festival-goers the opportunity to enjoy live performance while taking a respite for lunch and dinner between exhibitions and other festival productions.  No reservations are required, but priority seating will be given for those enjoying Festival Fare prepared by the staff of Treviso – the Ringling Museum’s popular restaurant.