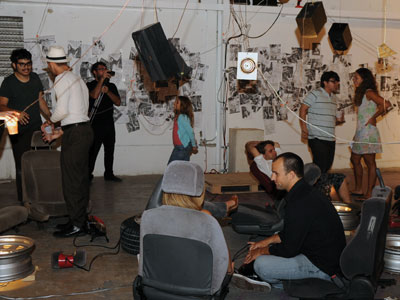 Three artist collaboratives explore the city’s solild waste.  On a sweltering summer afternoon last month, a City of Miami fireman hosed down dozens of inner city kids trying to cool off during a raucous back to school party, from the ladder of his fire engine.

A few yards away, at the Athalie Range Park on NW 5th Avenue and 62nd Street, a group of curious children swarmed the rusty end of a sawed-off flatbed with the word “murder” spray-painted on a side panel. The makeshift wagon was hitched to a shiny U-Haul pickup.

A wooden pup tent-shaped structure towered above it. A jumble of mismatched car lights were fastened with plastic ties to the raw 2×4 beams and attached to a sound system rigged from electronic gizmos. As the aptly christened Miami Trash Machine cranked up the noise, the tykes began squealing in delight and twitching like animated stick figures. A shirtless boy shimmied his hips wildly bouncing his green backpack across his shoulders to the syncopated beat blistering his eardrums. Another lad tickled a car headrest imbedded with a keyboard, rocking his head back and forth as the truck’s lights began dancing to the rhythm unleashed by his nimble fingers.

The rolling interactive installation that has transfixed these kids on the muggy August afternoon is the brainchild of Basurama, an artist collective initiated at the Madrid School of Architecture in 2000. Since then the project has evolved in scope but its focus remains the same: To study trash, waste and reuse in modern consumer society with a nod to the potentially subversive.

Basurama’s Benjamin Castro, Miguel Rodriguez and Antonio Lloveras recently spent nearly a month in Miami combing through our automotive graveyards to create works of art that offered a high-octane commentary on our pedestrian unfriendly expanses and crippling reliance on cars.

The Spaniard and his partners, Castro and Lloveras, trolled South Florida junkyards in a rented pickup for the car tires, seats, head and arm rests, car lights and sundry crap they needed to recycle for their exhibit.

They posted several videos on their website (www.basurama.org) featuring the trio cannibalizing cars with screwdrivers in Medley scrap heaps. In these film snippets one observed them rifling through the rusting hulks of the Chevy, Fords and Hondas stacked like cordwood in local junkyards, for the discards they scavenged for their gritty opus. At Doctor Batteries, their foray into the realm of recycled energy storage, took a comical turn when a Cuban clerk ribbed them about their trashy experiment.

Back at the Loft Space they arranged the automotive garbage in a sprawling grid, from which they created the interactive results of the exhibit.

Near the entrance of the space, Viking Funeral hung nearly thirty car speakers from the rafters, connecting the wires together to form a haphazard spider web pattern. Beneath the dangling woofers and tweeters, tires, rims and car seats added a loungy chop shop vibe where spectators could sit and play instruments fashioned from stripped circuit board guts and miscellaneous car parts.

“These are like Moog synthesizers or theremins,” Rodriguez said of the tricked-out instruments. “There are keyboards inside these car parts and people can use them to create any number of electronic sounds.”

Walking across the Loft Space to the Miami Trash Machine, with which Basurama also staged public interventions at several other Miami venues, the artist paused to inform that responses to their mobile contraption varied.

“We drove it to Karma Car Wash on Biscayne Boulevard and Jimbo’s at Virginia Key. People there didn’t react to it enthusiastically,” Rodriguez rues. “At Karma people seemed more interested in scrubbing their Bentleys. Jimbo’s crowd was equally disappointing.”

He says that at Churchill’s Pub, the reaction was decidedly livelier. “We had nearly fifty people who engaged with the installation and some were mixing sounds on the beat board and even rapping,” he laughs.
{mospagebreak}
Resting an elbow on his rickety rave roadster, Rodriguez holds forth on its origins. Basurama, found the decaying flatbed in an empty lot in Little Haiti. It was groaning under nearly a ton of busted concrete from a construction site. They approached the owner and offered to pay for it only to be told they could have it for free, if they would cart the eyesore away.

The RUS collaborators turned it into an amped up sound and light system complete with a generator and web cam. The public was invited to activate the traveling installation using disparate elements like a car alarm, a distributor cap or an oil filter, placed on a grid. These triggered sensors that repeated beats sounding like  “timbales, bongos, guitars or violins,” Rodriguez explained. Car parts were also turned into musical instruments and when people pressed attached keyboards the red and white lights strapped to the truck twinkled responsively.

During the exhibit’s opening spectators were also able to engage with Scrapyard Challenge’s interactive installation which Rodriguez referred to as a “junk guitar.” Moriwaki and Bruker-Cohen hung the side panel of a blue Toyota SUV on a wall, covering it with strips of red duct tape and silver conductive tape. The public was encouraged to arm themselves with water guns and take pot shots at its surface. If the spray dosed a certain spot, the butchered buggy sonically burped and its lights blazed intensely.

“They were using a technique called circuit bending,” says Rodriguez. “They went to dollar stores and bought stuff like Sesame Street toys that made beeping cars sounds then stripped them to use in their sculpture.”

On a wall next to it, the Basurama boys teamed up on a wall piece poetically evoking American car culture.

A few days after Basurama’s rollicking party, Rodriguez stood under a fishnet bursting with the garbage he and his fellow collaborators generated during their brief stay in Miami. The junk swayed precariously over his noggin like the sword of Damocles.

Absent of people, the now empty space appeared sad, the junk oddly peeled of its impact.

As Rodriguez surveyed the left over ephemera, one was left wondering how the visiting Spaniard – accustomed to the rambling plazas and bustling public spaces of Madrid – must have felt by comparison in pedestrian unfriendly Miami.

Researching garbage output versus consumption became inconsequential for the artist when he ended up stuck several days here without wheels before his return flight home. Rodriguez felt very much marooned and hopeless. In a town where people remain hostages to their cars and gas prices, Basurama’s timely project was as sobering as the artist was happy to high tail it from Dodge.