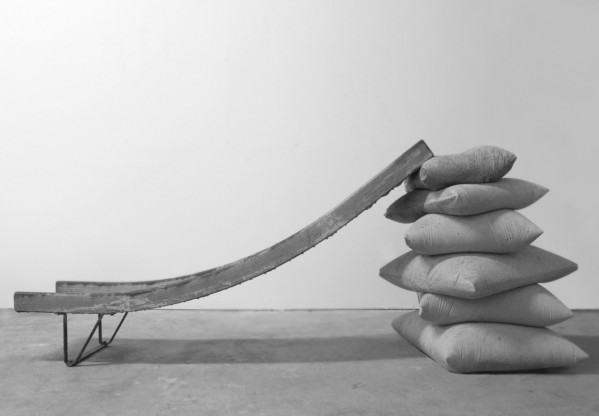 Spinello Projects presents Let It Slide, Johnny Robles’ first gallery solo exhibition. Robles’ sculptures and installations ignite a new kind of conversation: he invites his audience to revisit the infinite, faded world of childhood, challenging them to redefine its potency in the present. A live DJ set by Electronica act Washed Out will accompany the opening reception, as a satellite to the iiiPoints Festival.

Robles builds a kind of surrealist playground; a landscape where familiar forms of stimulation (both for learning and recreation) are warped into objects rendered obsolete, dysfunctional, and deflated. Gentle Collapse is a melancholic, exaggerated version of a rubber swing, seemingly as it would appear on a normal playground, only this frame is affixed to the ceiling versus the ground. Rather than safely cradling its rider offering the sweet exhilaration of nearly weightless flight, the rubber saddle lies overstretched, limp, and distorted. Sleep Sweeper is fashioned from an unaltered playground slide, made from galvanized metal and stainless steel; its construction, however, perched atop a series of casted concrete pillows, mutes its capability as a kind of perpetual escape. Coralphabet reaches into the consistent struggle between man and nature: Robles collected bleached coral from Florida’s Gulf Coast, once living beings, that uncannily echo the letters of the Anglo-Latin alphabet.

The gallery’s courtyard will be transformed into a more dangerous version of a typical outdoor playground: a seesaw, while in motion, propels each rider at least five feet from the ground, and a slide must be accessed by way of a rocky, mountainous form. These objects communicate the presence of risk in play. Robles does not, however, exclude the possibility of hope in his practice. His arrangement of materials and objects, themselves, remind the viewer that the artistic process is one of great regenerative capabilities as each sculpture is, effectively, reborn as something else.