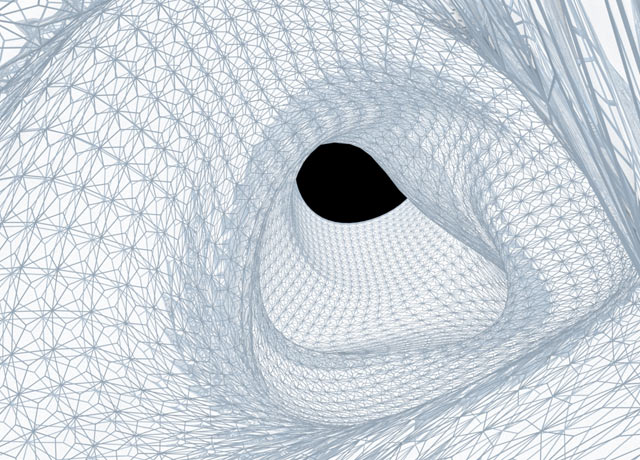 Eighteen FIU architecture graduate students are spending a good deal of their spring semester closely examining objects from the Wolfsonian museum’s collection as part of their coursework for Space, Society and the Digital: Virtual Worlds and Visual Aesthetics, taught by Winifred E. Newman, associate professor in the College of Architecture + the Arts. While this is a history of technology course, in many ways Newman is asking the students to reconsider the ways in which we typically think of technological development. “We tend to think of technology as progressive and determined and increasing in efficiency. This course wants to undermine that approach, and to begin to understand how things are embedded in multiple systems,” she explains. “What develops over time is not only about function, there are many other factors. There may have been a better bicycle design, but if people don’t use it, it dies over time. Leonardo may have invented the airplane, but there wasn’t a driving need for it at that time, so it wasn’t developed.” As a contemporary example, she mentions smartphones. “Why did Nokia phones first become popular and now the iPhone? They both do the same thing. It’s not just about function, there is something else in effect.”

What we think of as the digital revolution is not a recent phenomenon, but instead dates back to the beginning of the Industrial Revolution, which is why integrating Wolfsonian objects into her course is so valuable, Newman explains. She spent a good deal of last summer researching the collection to identify objects to explore in the course. “I want students to look at the museum through a different lens. Typically, they look at The Wolfsonian from an aesthetics standpoint. I want them to think of these objects in terms of the history of technology,” she says. She encourages this shift in viewpoint not only for the collection, but for architecture as a whole. Architecture history tends to discuss buildings first, and technology as a secondary concern. It is instructive to instead position architecture within the history of technology if we are to better understand not only its history, but our built environment’s present and future.

The students choose an object or set of images from The Wolfsonian’s collection as their research topic. They begin with an in-depth analysis of the object, which includes diagramming it. They then create an “alternative” technological solution for contemporary times using the premise of the original. The course will culminate in an exhibition of museum objects and student work (details for the exhibition are still being determined).

Newman received a Course Development Grant from The Wolfsonian. She is one of three FIU professors awarded similar grants for the 2012–13 academic year; the awards are funded through a three-year grant from the Andrew W. Mellon Foundation.

William H. Bradley was America’s foremost graphic artist from the end of the nineteenth century into the 1930s. Derived from the Art Nouveau aesthetic, the flowing lines of his designs for advertisements, periodicals, catalogs, and posters made a marked impact on both commercial and fine art in the United States. The Wolfsonian–FIU Museum 1001 Washington Avenue Miami Beach, FL 33139 305.531.1001 www.wolfsonian.org

This exhibition showcases the Spring/Summer 2016 collection of Fashion designer duo Abdul Abasi and Greg Rosborough inspired by East-West/West-East, a public art installation of bronze monoliths by Richard Serra in the Qatari desert. As colors and textures in the garments communicate this unique life experience, their collection is a perfect embodiment of public art inspiring the creative economy. In a recent New … +

From the Jane Gershon Weitzman Collection, Art & Sole: Fantasy Shoes features over 150 of the most inventive examples of these fantasy art shoes, remarkable for their imaginative construction and elaborate adornment. Art & Sole exhibition was curated by Jane Gershon Weitzman. Shoes are constructed of unexpected materials such as bronze, ceramic, wire, Plexiglas or in the case of Robert Steele, corrugated … +