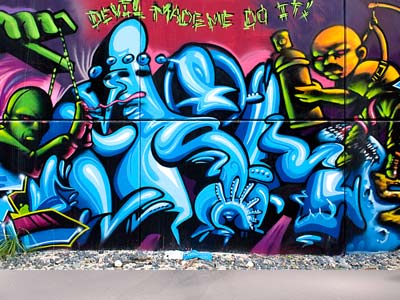 It’s summertime in Miami: Official artistic activity slows down as the temperature heats up and various members of the cultural community depart to cooler and slightly less lethargic locales across the globe. But the season also gives natives a chance to savor what’s here in an unhurried pace, as some galleries and museums leave shows up for an extended period and artistic life reverts to a localized phenomena. Here, then, is a taste of the Summer of ‘09.

While most people are familiar with Wynwood nights, fewer venture out to Miami’s art hub during the sometimes broiling, often lonely, days. But in the mid-day sun, day trippers this summer might have noticed a, well, marked change in the facades of the old neighborhood. Over the last year, graffiti artists have covered huge swathes of wall-space with vivid murals, surreal landscapes, tags, scripts, and memorable characters. Some have been commissioned, some are sprayed spur-of-the-moment, but by July it became clear a critical mass had been achieved to actually call the area itself an out-door art space.

All along North Miami Avenue and on connecting streets remarkable works jump out at the visitor, from the simulations of revolutionary posters in red and black on the Dorissa building and around, down to the dark, post-apocalyptic scene featuring two lovers in hazmat suits on 24th; to the image of a catholic cardinal across the street and the huge and elaborate murals on the corner of 21st.

So it may not be surprising that another highlight of the summer was the release of Miami Graffiti by James and Karla Murray, who documented Miami’s graffiti culture over the last decade in this striking book. Through vivid photographs and the unedited words of the graffiti artists themselves, the book reveals a remarkably vibrant world that’s been hidden too long. “A strong graffiti art scene has existed in Miami for over a quarter century, but it has hardly been documented,” explains the New York-based duo. “The scene has often been overlooked, not only because of its extreme southern geographical location, but also because of the media’s slick graffiti-free ‘South Beach’ image of Miami.” Locals such as Typoe and Santiago, who have shown at Spinello Gallery, along with others and the crews they belong to are featured between the covers.

Once summer is over and the crazy season begins, the Murrays will be bringing down a graffiti show for Art Basel, which will highlight blown-up store-front images painted over by artists such as Miami basedCrome. The storefront images that Crome and others painted on were part of an exhibit called MOM and POPism, where “we printed out almost life-size – about 60% to scale – images from our ‘Store Front-The Disappearing Face of New York’ book, and wheat-pasted them to specially constructed boards,” according to the Murrays. “Three of the large panels will be traveling down to Miami with us and exhibited at Graffiti Gone Global in Midtown Miami.”

Next time any of those artists show at Spinello, it will be in that gallery’s new space on 38th street in the Design District, next to the new space of Locust Projects and other artists’ studios – on what may become the latest drag to see and be seen in the art scene.

Locust in its expanded digs kept the slow season alive with an invitation to watch the TM Sisters create their site-specific performance and exhibition Whirl Crash Go!, which was set to debut after this publication went to press in late August.

Over six weeks, the “sisters” Monica Lopez De Victoria and Tasha Lopez De Victoria set up what looked to be an eclectic and electric show, combining synchronized swimming, roller skating, animated video, sound, light, and design. A peek into the Locust store-front space in July revealed day-glo colored cloth, paneling, and cut-outs; white canopies, a swing, pillows, and various projection/production gadgets. Grade for intriguing: an “A.”

Which could also be said of a one-night only event at Locust in July: “Balls in the Air” from the video team of Bill Bilowit and Grela Orihuela of the Wet Heat Project. Rather then simply showing video, they decided to interview and film people on gallery-walk night. They transformed the space into a production studio, complete with two camera set-ups, AV and computer tech, make-up, and a green room.

Willing participants would take a seat in front of the lights, get mic’d, have 60 seconds from “action” to “cut” to talk about their upcoming roles in the art world. Of the “self-possessed, unguarded, put-ons, and stream-of-consciousness interviews,” says Orihuela, “we put 50 ‘in the can’”.

Another one-off event worth mentioning is MoCA’s annual “Optic Nerve” short video and film evening in August. Although it is often a summer highlight, this year the offerings felt less saturated in pop imagery and a little more steeped in substance – a refreshing change. Some used humor to poke fun at our vanity, such as the hair product that morphs into a truly toxic menace in Cristina Molina’s Silky Smooth Hair Relaxer; Luis Crump used word play to create a mesmerizing piece called Concrete Poems; and one of the best in the bunch used (French) words, music, and humor to create a poignant story of a dying opera singer in m lafille’s “Marie Josée.” And the winning video purchased by MoCA went to …. The TM Sisters and the hyper-colorful She Said As Long As You Run With Me.

A more dimly-lit stand-out was the lighting show “Luna Park” at Alejandra von Hartz, which ran through the summer. Six artists were asked to create functioning light pieces that could work in real-life areas, not just in an art gallery, “from the family room to the corporate lobby, from the themed club or restaurant to the university dorm, from the corner cafeteria to the outdoor promenade.”

The result: a beautiful, balanced, thoughtful show worth seeing more than once. On the back wall facing the doorway, Daniel Arsham – whose inner architect is always on display – “mounted” a piece that grew out, in the same off-white tone, from the wall and encased a fluorescent tube. It was a simple, sensual work, the strongest in the show. Martin Oppel left light-bulbs in their card-board casings such as you buy them in the store, and lit up a dozen of them up on the floor, in one single, minimal piece. Gavin Perry took a bigger approach, literally bending plywood into five lamps, and Luis Gispert used wood and halogen for his lighting fixture that intentionally resembled a record needle.

That musical reference resonates with anyone familiar with Gispert’s body of work, which was on display for maybe the best show not just of the summer, but of the year, at MoCA Goldman Warehouse. The first solo museum outing from the locally raised artist meshed his video, audio, photographic, and sculptural output from 1999 to the present in a vast, engulfing and engaging show that made Miami proud.

On some walls a single giant C-print would be mounted, such as his images taken from inside an uber-tricked-out Escalade with all its shiny trappings, out to an urban landscape; or his semi-autobiographical photographs of kitsch Cuban-American family life in the suburbs. The show included his early hip-hop hoochie cheerleader video series, shot against those bright greenscreen or bluescreen backgrounds (often used as blank slate backdrops over which other images are superimposed); and also his sound installations, which in the past might include the boom boxes that ubiquitously showed up in his visual works. And it incorporated his long films – his wild trippy rides Stereomongrel and Smother – capped off with his most recent, a more solemn and serene piece about the loneliness of making art.

Finally, “New Abstraction” at the Carol Jazzar Gallery was a real eye-opener for anyone troubled by the current state of that particular genre. In a handsomely hung show in the garage gallery, small-scale works from seven painters jumped off the walls and made the viewer want to spend some serious time with these abstractions. From the process – the “experimentations with paint application, surface quality, and the intuitive development of shapes” – to the final visual product, these pieces, in a variety of media, made contemplation of the form fun. The gallery re-opened a version of the show in August, with Lynne Gelfman, Christian Haub, Rory MacArthur, Leslie Wayne and Jen Stark, which will run through October.