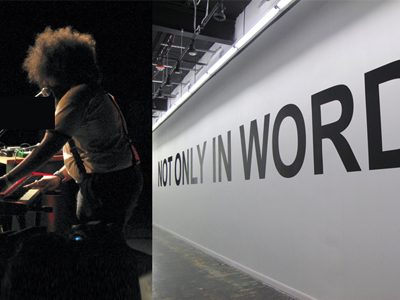 The Wynwood Art District is no stranger to new tenants. There is an almost alarming regularity to the opening of new businesses – galleries, restaurants, cafes – that one might wonder whether or not the warehouse-laden landscape can sustain them all. And yet, it thrives. Not only that, it continues to evolve into a neighborhood that pushes the boundaries of art in all its forms.

Earlier this year, one of the more enigmatic new inhabitants to the area began to stir. The Light Box at Goldman Warehouse, a collaborative artistic environment occupying an expansive space on 26th Street and NW 4th Avenue, was the scene for the first performance by the Miami Light Project since they moved to their new location. The 20-year-old organization that brings contemporary dance and performance art exploits to the city began by presenting Reggie Watts’s Florida debut.

On May 12 and 13, the Light Box drew two sold-out crowds eager for a taste of Watts’s unique musical exhibitions. Characterized by disorienting live performances, which incorporate hip-hop, trip-hop, 80’s pop alternative, nu-metal and classical opera, Watts at once exhilarated his audiences and helped to usher in Wynwood’s newest element. It was a set of performances that personifies the Light Box, which itself is a chimerical operation incorporating many progressive elements; pieces, you might say, of what is sure to become an exceptional conglomeration of artistic minds.

“The vision we had for the Light Box,” says Miami Light Project managing producer Rebekah Lengel, “was to create a space that would be lived in and used by multiple art non-profits and artists in the community.” By sharing resources and fostering a sense of camaraderie, these artists and organizations can put their efforts and finances into more creative and constructive projects. It will also act as a place where audiences gain a deeper understanding of how work is made by having the chance to visit and see such work in various stages of development.

In addition to being inhabited by the Miami Light Project, the Light Box is also home to The M Ensemble, Florida’s oldest African-American theater company, and Arts for Learning, an arts-in-education organization that works with professional visual and performing artists to support academic achievement and child development. Additional tenants are expected to join these anchor groups in the future.

The next step was to find a suitable location for this innovative new project. “We went through a long process of meeting with developers and looking for spaces,” says Lengel, before eventually cultivating a relationship with Goldman Properties, who offered them the Goldman Warehouse in Wynwood. “The Goldman partnership matched the Knight Foundation grant and allowed the refurbishing of the warehouse into a theater space.”

Now with a proper edifice in a part of town that by its very nature inspires creativity, the Light Box was ready to finally take form. “The model we came up with,” says Lengel, “was focused on sharing space and usage. It became a matter of how we would come up with that model.” It did so with the help of architect Oscar Glottman, who designed the Light Box’s interior with a critical eye for the details that would make the Light Box’s vision feasible.

The layout focuses on a large, flexible theater space that will be arranged to accompany specific performances. The stage and seats can create a theater in a round atmosphere, for instance, or opt for a more unique, or traditional arrangement, both sitting a maximum of one hundred and seventy individuals.

Adjacent to the theater is an array of office spaces and conference rooms tailored to the current tenants and able to be altered to their needs. A lounge, too, is available for guests to enjoy a cup of coffee or a glass of wine. Its aim is to facilitate lively dialogue about the way culture shapes the community. Conversations like these are the kind the Light Box seeks to stimulate, and those who have visited have already responded with positive enthusiasm.

As the Light Box continues to develop, cultural enthusiasts will have plenty more similar performances to look forward to. While it is too early to say exactly how this institution will impact Miami’s art scene, it will undoubtedly do so. With such forward-thinking ambitions and the Miami Light Project’s strong history of providing cutting-edge performances, the Light Box is sure to help nurturing the cultural dialogue in Miami.