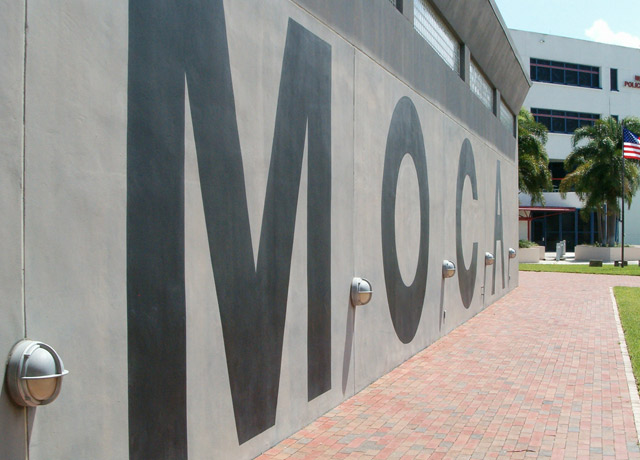 In 2005, the Museum of Contemporary Art (MOCA), North Miami launched an experimental program called Trading Places in which South Florida artists swapped their studio spaces for the museum’s galleries for the period of two months. From September 13 through November 11, 2012, MOCA has invited five South Florida artists: Dona Altemus, Onajide Shabaka, Magnus Sigurdarson, Rick Ulysse and Antonia Wright to participate in Trading Places 2, the second installment of this program.

MOCA by Moonlight will feature two special panel discussions with the artists. On Wednesday, July 18 at 7:00 p.m., Dona Altemus, Onajide Shabaka and Antonia Wright will speak about their work and upcoming Trading Places 2 projects. Magnus Sigurdarson and Rick Ulysse will speak on Wednesday, July 25 at 7:00 pm. Both events will be moderated by MOCA Executive Director and Chief Curator Bonnie Clearwater. Admission is free for MOCA members, North Miami residents and City of North Miami employees; $3 for seniors and students with ID. To reserve a seat: visit www.mocanomi.org or call 305 893 6211.

The emphasis of Trading Places 2 is on the research and development of projects rather than specifically working toward an exhibition, although works may be exhibited or performed at the museum. The artists selected have reached critical moments in their careers when they can most benefit from the opportunity to work with MOCA’s curatorial and technical staff.

This program provides the artists with studio space in the museum’s galleries, materials and technical assistants, and opportunities to interact, respond to and investigate each others’ practices and engage in periodic discussions with the public.

A new component of Trading Places 2 is the role these artists will play mentoring the teens and young adults enrolled in MOCA’s free afterschool education classes and intern program, as part of the MOCA Art Institute, MOCA’s extensive education program for students of all ages.

Trading Places 2 is organized by the Museum of Contemporary Art, North Miami under the direction of MOCA Executive Director and Chief Curator Bonnie Clearwater.

Dona Altemus, the youngest artist in Trading Places 2, is a 2012 graduate of New World School of the Arts, where she earned her BFA with a concentration in painting.  For Trading Places 2, Altemus will investigate installation as a tool and explore spatial relationships that are activated when separate works interact.  Altemus first came to Clearwater’s attention when she presented her work at MOCA’s unique Artist Critique program held twice a year, in which approximately 15 students from South Florida art schools present their work to MOCA’s curators for critique at each session. Clearwater notes, “I was impressed by the initial presentation and the maturity of Altemus’s vision. Trading Places will provide her with the opportunity to determine her post-graduate path.”

Onajide Shabaka’s work makes references to the anthropological, geological and biological through a visual aesthetic that is challenging and visceral, with a grounding in African Atlantic culture.  Since 1997, his work has largely moved into the Florida wetlands, upper Minnesota and Oregon woodlands. He will use Trading Places to bring his art practice back into the formal gallery through photography, drawing and sculpture of natural and industrial materials.  Bonnie Clearwater first worked with Shabaka when she selected him for the exhibition New Art: South Florida at the Museum of Art, Fort Lauderdale in 1993, and notes that his recent body of work based on botanical studies conducted in South Florida marks a new path for him to develop.  “With his extensive experience teaching at the college and university level, Shabaka will play an important mentoring role for the teen and young adult students in MOCA’s afterschool programs,” she said.

Rick Ulysse was born in Port-au-Prince, Haiti in 1983 and grew up in Philadelphia where he attended Tyler School of Art.  Newly relocated to Miami, he is especially interested in continuing his research for his latest series of drawings based on Toussaint Louverture and the Haitian Revolution.  Imagination, cartoon realism, ethnography and historical fiction all combine in a non-linear fashion and avoids direct story telling in the traditional sense.  Ulysse notes that he uses “an open form to negotiate/infuse the everyday and current events into a broad conversation about history. Using this process allows me to garner a variety of sources from Japanese anime and Walt Disney, to Christian iconography and African symbolism.” One of the aims of his work is “to communicate to my younger cousins about Haitian history and identity. Theirs is a generation that views cartoons as reality.” He will have the opportunity to work directly with the teens and young adults in MOCA education programs, approximately 70 percent of whom are Haitian, and he will have access to South Florida’s centers for Haitian historical research, including the Haitian Historical Museum and Archives in North Miami.

Antonia Wright’s project will reflect her background in performance art within the mediums of video, photography and installation to explore the environment of MOCA. A poet and photographer, Wright introduces social critique into a broad conceptual framework with imagination and conviction. She received an M.F.A. in poetry from the New School University in New York and studied at the International Center of Photography.  Wright was one of the finalists in MOCA’s Optic Nerve XIII film festival in 2011.

Magnus Sigurdarson was born in Reykjavik, Iceland in 1966. He will further explore the concept of identity and his search for “Miami Melancholy,” which has been ongoing since his move to Miami in 2004. “As a true blood Northerner with deep roots in Melancholy and the poetic enclose or angst as an artistic motivator, I have been searching for the ‘Tropical Melancholy’ and the ‘Subliminal in the flatness of Florida.’  This has of course opened my heart to all the other emotions,” Sigurdarson notes. In Iceland, Sigurdarson mentored many younger artists, including Ragnar Kjartansson who had a recent exhibition at MOCA.

Clearwater notes, “One of the essential aspects of any art community is the interaction between its artists. Trading Places helps to forge a stronger relationship between multi-generational artists and the students they mentor and to engage the public in the creative process.”