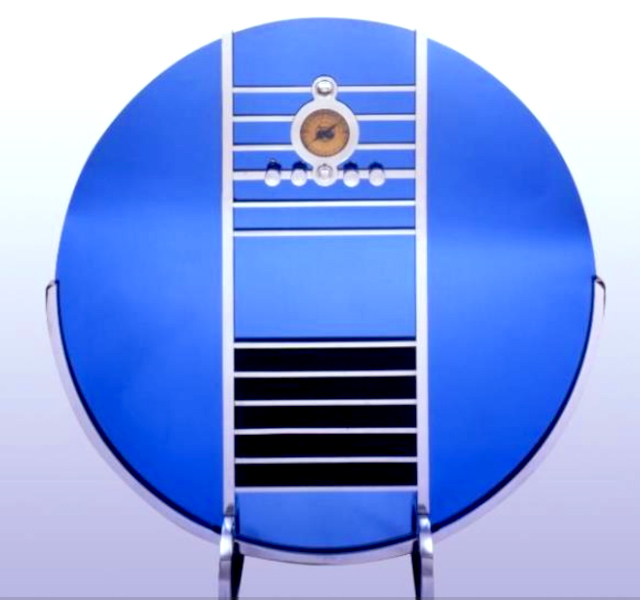 More than three dozen new objects, along with two new special installations, are part of the recently updated Art and Design in the Modern Age: Selections from The Wolfsonian Collection (ADMA). The updated installation retains the exhibition’s core themes and overall structure while refreshing its graphic identity, refining the exhibition design, revising text panels, and introducing new material.

ADMA showcases approximately three hundred American and European items from the museum’s collection period (1885–1945) in a wide range of formats, including decorative arts, furniture, industrial objects, paintings, sculptures, books, posters, and postcards. The exhibition reflects and explores this time of rapid change in the human environment due to industrialization, urbanization, advances in transportation and communications systems, and related developments. In the words of the introductory text panel, “The works on display in these galleries reveal how people living in this tumultuous period viewed the world and their place in it.”

The exhibition also introduces visitors to The Wolfsonian’s particular approach to modern cultural artifacts, explains Matthew Abess, The Wolfsonian’s assistant curator. “The galleries offer a survey of core collection themes and concerns. With this update we hope to emphasize that whether we are considering a teacart from Sicily or a souvenir from St. Louis, these materials are witness to a shared story. As part of the update, we have worked on further developing the arc of that narrative and establishing systems of display that better allow visitors to take part in discovering meaningful connections.”

Objects newly on display include the Nocturne radio (c. 1935) designed by Walter Dorwin Teague, which was last on view in ADMA in 2007. The radio, long a viewer favorite, is a sought-after loan item showcased in several exhibitions nationally and internationally. During the past decade it has been seen at the Victoria & Albert Museum, Royal Ontario Museum, California Palace of the Legion of Honor, and Museum of Fine Arts, Boston.

Another new item is a poster for an 1898 exhibition of engines and machines in Munich that included the first public display of a range of diesel engines—II. Kraft Und Arbeits Maschinen Ausstellung, München 1898 [Second Exhibition of Engines and Machinery…] (1897) by Adolf Münzer.

ADMA has traditionally rotated in themed installations and will continue to do so. The current update includes a gallery devoted to recent acquisitions. Also new is an installation featuring the theater designs of S. Charles Lee (1899–1990), a versatile and prolific architect who designed more than four hundred movie theatres between 1920 and 1950, the majority in California and Mexico. His work exhibits a broad range of engagements, from revivalist styles such as Spanish Colonial to streamlined design.