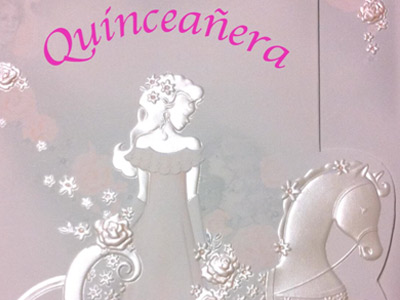 Antonia Wright investigates the universal human condition through a multifarious, process- oriented art practice combining photography, performance, poetry, video, installation and sculpture. A poet and photographer, Wright introduces social critique into a broad conceptual framework with imagination and conviction.
She received an M.F.A. in poetry from the New School University in New York City, studied at the International Center of Photograph, and has worked for Clyde Butcher, Patrick Demarchelier and VICE Magazine among others.

A Quinceañera, a party in the celebration of a girl’s fifteenth birthday in Latin America cultures, is a coming of age celebration that traditionally, announces the girl is ready for marriage. It resembles a wedding in scale, significance and cost, and the aesthetic is unique and quite pronounced; fantasy, princess-like, and expensive. Miami has one of the largest Qunceañera photo studio businesses in the world. Often, the party is superfluous and skipped. The photos are important.

“Even though I am Cuban, I never had a Quince party. I drive by a billboard on my way to work advertising Quinceañera photo packages. It made me think about why girls in our day and age continue this tradition, and the industry built around it. I made an appointment at studio, a one stop-shop Quinceañera photo studio with everything included. I went to the two-room business on Calle Ocho and answered a series of questions about what I wanted, while keeping authentic to the medium. My favorite color was green so we chose the green dress, I liked the outdoors so we picked a garden back drop. They did my hair and make up in typical fashion and told me to look here, place my hand there, hold this, smile, no smile etc. After three hours, we chose the best images off the computer and the frame I wanted. I was in today’s standards, a Quinceañera.

What interests me about the concept is that none of it is real. Not the photos, the dress, the fake background, or even the idea that one day you turn 15 and mature. This illusion, as seen through the photos, is for the ego. The parents can spend up to 10,000 dollars on a photograph, proving they can afford to make their daughter look expensive and princess-like. Their financial insecurity and desire for their daughter to marry well are manifested in the images, Who is perpetuating this tradition? It seems this money would be better spent on the girl’s college education, which begs the question, what is the girl’s role in this society? This antiquated tradition is revealing of the undercurrent of sexism in Latin American cultures. What the photographer found strangest about my photo session was that I came alone. Who were the photos for?”

Last year, Wright was recognized as one of Miami’s top “100 Creatives” by the Miami New Times. Her recent exhibits include shows at the David Castillo Gallery, Dorsch Gallery, The Tampa Museum of Art with the Hadley Martin Fisher Collection, The Invisible Dog curated by Steven and William Ladd in New York, the Art and Cultural Center of Hollywood, The Frost Museum at Florida International University, Amnesty International’s exposé on Cuban-American Artists at A+D Museum in Los Angeles and a solo show, Are You OK? at Spinello Projects. She was a finalist in MOCA’s Optic Nerve 2011 video contest. Her work will be included in the Margulies Collection at the Waterhouse’s 2011-2012 Exhibition.

Wright has been featured in New York Magazine’s article. “The New Talent Show: Pot-Luck Culture,” on the burgeoning salon scene in New York City, which she helped create. She is currently an artist in residence at the ArtCenter South Florida and works for Martin Margulies as the guest curator for The Wynwood Art Fair.

The opening night reception for Where All Your Dreams Come True is Friday, November 4th, 2011, 8 – 10 p.m. and is free and open to the public. The exhibition will be on view from October 29th through November 25th, 2011 weekdays from 11:00 a.m. to 5:00 p.m. Free parking is available across the street at the Central Bible Assembly of God on opening night.