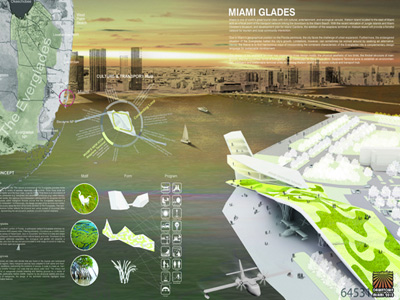 Winners of the 2010 DawnTown architecture competition, which invited innovative designs for a seaplane terminal on an island in downtown Miami, were announced on December 3rd, at an award ceremony that featured remarks by world-famous architects Chad Oppenheim and Terry Riley.

Winners of the competition, which was sponsored by the John S. and James L. Knight Foundation and the Miami Downtown Development Authority, appeared at the award ceremony at Miami Dade College’s downtown campus by video from around the world to explain their designs and offer thanks.

The first-prize team noted that the competition site, Watson Island, has potential as a “great cultural and transportation hub” and thus described their design as an “environmentally-intelligent” building that “embraces the culture and nature of Miami.”

The second-prize team emphasized that their concept was to “translate the remarkable amphibian character of the seaplane into a sculptural architectural composition with intricately woven spaces”, a task they termed “urban design choreography”.

Mr. Wetzel and Mr. Plock, winners of third prize, explained that their design was “first about function and how to create a focus point in the area” that both “arranged spaces in a simple way” and “created a sense of arrival from both water and land”.

Following the announcement of prizes and honorable mentions, Mr. Oppenheim spoke about his architectural philosophy. “The idea is to blend the foreground and background,” he said, “allowing the natural world to permeate and become central to the design”.  Mr. Oppenheim presented several of his firm’s designs that reflect this idea in locations as diverse as a tropical city, a desert, and a group of man-made islands.

The ceremony began with Mr. Riley’s impressions of the 2010 DawnTown entries. “The world projects optimism onto Miami; you see inexhaustible optimism coming from these designs,” said Mr. Riley.  “But the designs are a mirror, a reflection of Miamians and our city, just bounced off other surfaces.”

Looking back on this year’s competition, Co-Director Matthew Anders concluded, “DawnTown has once again brought exciting, international architectural ideas to Miami, and fostered important discussions and the talent of designers, both young and old.”