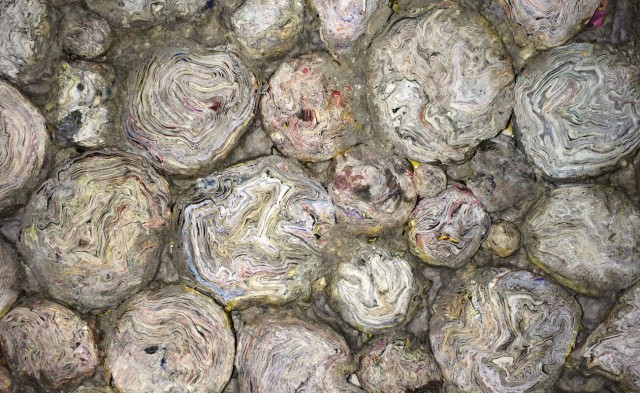 Death of a Printed Story is a comment and personal reaction to the inexorable massive presence of printed propaganda in our everyday existence. In a predominantly visual culture that overproduces printed material, the piece explores the relationship between reality and simulacra, creating a scenario where media begin to reign in contradictory and conflicting rivalry with themselves. Reality has been frozen and stopped in time by this grey matter which covers the room and detains life and movement. Deconstructing the logos that suffocates us in an abstract space is at once both threatening and delicately meditative. Compressed paper rolls and grey pulp made by combining pages from history, religion, fashion, pornography, and art magazines are reassembled to produce a mixture that is completed once the spectator, as part of a complicit relationship, steps into the space. The material has been used as an organic and invasive substance, reducing the space to a grey zone detained in time. The material that once had contributed to build our culture through centuries, defining both, our individual and social psychology has expanded as an incontrollable plague through the space denoting its devastating scatological and destructive implications.

Fabian Peña was born in Havana, Cuba, in 1976. He currently lives and works in Miami, Florida, since 2006. Fabian graduated from the Superior Institute of Arts in Havana, in 2003. Peña has worked as part of the duo “Elsoca & Fabian” (1999-2007) and with a group of artists in the “Colectivo Enema” (2000-Present). With these groups he participated in numerous performances, videos, and multimedia events in Latin America, the United States and Europe. He also participated in the production of the four editions of the magazine “Enema.” Fabian is a recipient of a Residency at Vermont Studio Center (Reed Foundation Fellowship Award) in Johnson, Vermont, United States, a residency granted by Gasworks Residency/Triangle Arts Trust, The British Council and The University of Brighton as part of the Batiscafo Project, among others. Fabian’s work has been reviewed by publications such as ARTnews, The New York Times, Art Nexus, The Art Newspaper, and The Miami Herald.

Opening Reception: Friday December 5, 7 – 10 pm
The exhibition be open to the public during the exhibition dates by appointment and during Art Basel Hours, December 4 – 6, 11 AM – 4 PM.