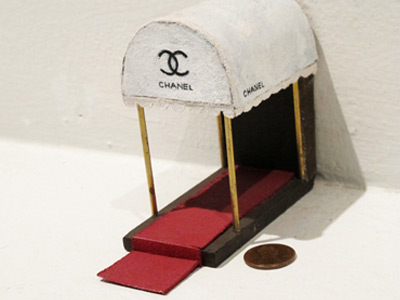 Primary Projects is presenting It Takes All This to be Me by Los Angeles-based artist Kenton Parker in his first solo project since 2007. Borrowing and re-appropriating mainstream cultural imagery, then barraging that aesthetic with subtly aggressive visual and textual commentary, Parker subverts and subsequently defies the authority of the surfaces and personalities he encounters.
Parker’s own studio reflects this trajectory in the form of crudely documented musings on sexual deviation, amusement, critical texts and instinctive responses over thousands of sheets of paper.

In the context of the exhibits title, Parker inhabits multiple roles as the vagrant, the journalist, the graphic designer and the taco vendor, all filtered through film, sculpture, installation and traditional wall-based art. ‘My First Ralf’ is one such example; a nine-minute short film shows Parker playing ‘Frank’, a vandal for which a public service announcement is made to viewers not through the transmission of practical information, but rather through his own culture-bending acid trip.

Loosely bound to the heels of an iconic Richard Prince collage, Parker deploys his dated, 50’s-style bulletin threaded through his own YouTube videos and original photography. A miniature replica of his fully-functioning ‘Taco Shop’ will inhabit the gallery space, dressed in tiny ceramic tiles, stainless steel finishes, and Retro neon signage.
It Takes All This To Be Me will feature a selection of works created over the past four years, with a significant majority of the corpus inspired by the last ten months of the artist’s life and activities. Parker’s practice is deeply rooted in the cultural incubator that is Los Angeles.
Powered by artistic collective Primary Flight, Primary Projects is a multidisciplinary space, positioned at the heart of Miami’s Design District, which aims to explore and promote multiple forms of aesthetic expression from established and emerging artists. Utilizing extensive, and wholly specific, experience in producing street-level curatorial endeavors in Miami, the creative forces behind Primary Projects unites the commercial and critical efforts of artists, critics, curators, professionals and patrons; the result is the vital presence of an intelligent, alternative arts environment with a bold, urban sensibility delivered through a diverse range of media.

Albizu University and Patricia Jimenez Art Space present the exhibition THE GAME, featuring works by Ernesto Capdevila. THE GAME consists of a selection of Capdevila’s most recent series of sculptures and gets its title from … +