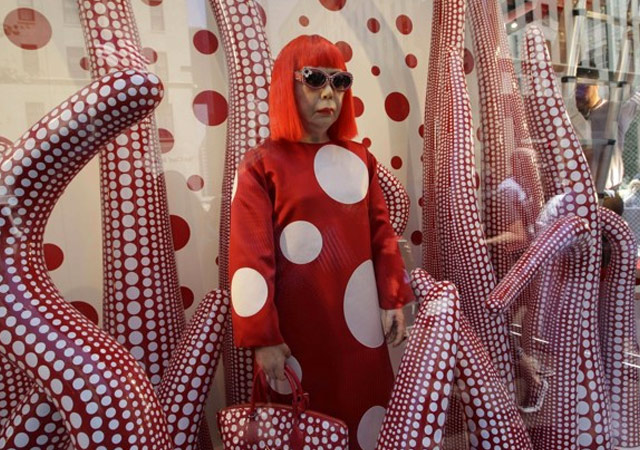 Since its creation in 1854, Louis Vuitton has maintained a close relation with the world of art. Strengthened by this tradition, which has been intensified under the artistic direction of Marc Jacobs, Louis Vuitton is happy to associate itself with the first retrospective dedicated to the Japanese artist Yayoi Kusama. This exhibition, which invites visitors to immerse themselves into the world of Kusama, has been travelling from the Museo Nacional Centro de Arte Reina Sofía in Madrid to the Centre Pompidou in Paris, and will continue its journey to the Tate Modern in London and the Whitney Museum in New York City, next July 2012.

Louis Vuitton would like to pay tribute to the exceptional artist for whom Marc Jacobs, Artistic Director of the House, has great admiration. A collection issued from the collaboration between Yayoi Kusama and Marc Jacobs will interpret the most emblematic artworks of Kusama.

It was in 2006 that Marc Jacobs encountered Yayoi Kusama in Tokyo. Art collector Marc Jacobs is a fan of Kusama’s sculptures and paintings: “the obsessive character and the innocence of her artwork touch me. She succeeds in sharing her vision of the world with us.” The admiration is mutual: Kusama, whose works include many performances which examine clothing and the body, has a profound respect for Marc’s creativity. A photo of this encounter is today hanging on the wall of the Kusama Studio in Tokyo.

The starting points for the collection were obsession and seriality. The iconic Louis Vuitton leather goods, ready-to-wear, shoes, accessories, watches and jewellery became the supports for Kusama’s organic repetitive patterns. Treated in vigorous and hybrid colours, the polka dots cover the products infinitely. All over, express the unlimited possibilities of playing with scales, colours and densities. When the “kusamesque” figure comes to life, the patterns ripple and lead the eye into a stroboscopic game. No middle, no beginning and no end: this hallucinatory proliferation will also be relayed in the Louis Vuitton windows worldwide decorated
with emblematic motifs: biomorphic shaped “nerves” sculptures for windows named “Beginning of the Universe”; flowers entitled “Eternal Blooming Flowers In My Mind” and especially red polka dots on white background among which Kusama figures named “Self-Obliteration” can be spotted. For the artist, who sees her life as “a dot lost among millions of other dots”, this collaboration will allow her to spread her polka dots infinitely across the world and convey her message: “Love Forever”. “It enables her to increase her audience and that of contemporary art in general, concludes Marc Jacobs. The task Louis Vuitton has always set itself.”