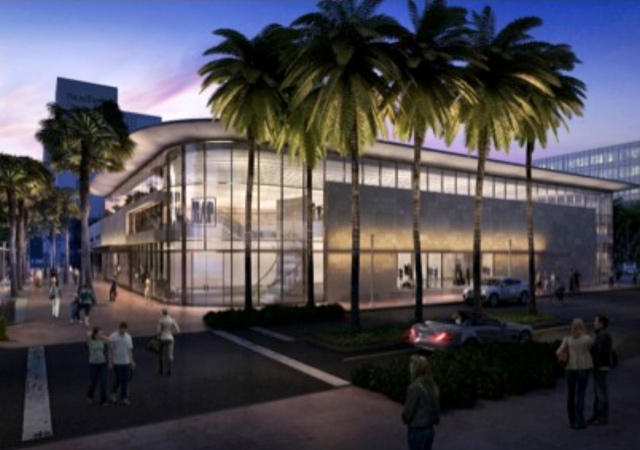 On June 12th, the property at 1001 Lincoln Road again came before the Miami Beach Historic Preservation Board (HPB). The last time the board reviewed the plans for this property, the proposed building designed by Apple. Inc. was very controversial. The owners and Apple proposed a complete demolition of the existing structure and a new design that was incompatible with the Lincoln Road historic district.

Over the past several months, the owners and representatives of the local architecture firm Touzet Studios met with MDPL’s Public Policy Committee to discuss plans for a new proposal. In the end, a new design emerged that included the retention and restoration of a component of the current structure that remains intact from the 1940s.   The new plans also include a curved corner and other details of found on the current building and other historic buildings seen on Lincoln Road. This compromise to retain part of the building changed the proposal before the HPB from a total demolition to a partial demolition. MDPL’s Public Policy Committee felt that this compromise, together with a design that is mindful of Lincoln Road’s history, is an appropriate way to preserve the character of our iconic street.

In the end the architects and ownership, represented by Michael Comras and Jonathan Fryd, are to be lauded for their interest in understanding MDPL’s concerns and willingness to work to maintain the standards of historic preservation on Lincoln Road. Also to be thanked are members of MDPL’s Public Policy Committee – including Arthur Marcus, Jeff Donnelly, Mitch Novick, Jack Johnson, Clotilde Luce, Judith Frankel and Charles Urstadt – who spent much time and effort wrestling with this issue.

MDPL chairman Charles Urstadt summed up the process in an article in the Miami Herald on the new building: “This is a great example of something that has worked to the benefit of the community, historic preservation and the owners.”