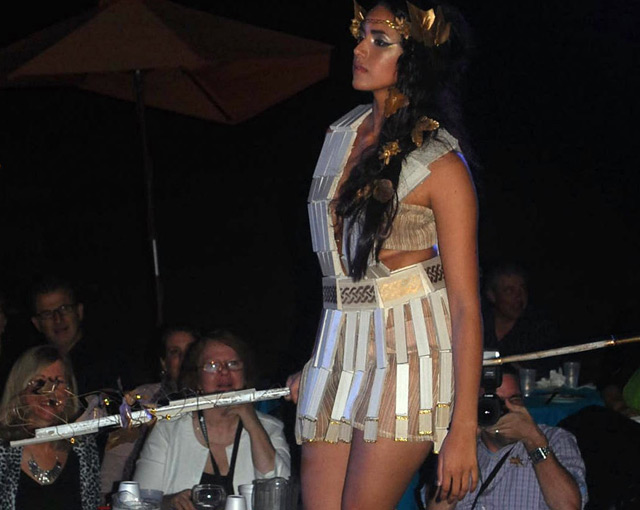 Drawing inspiration from Gaia, Greek goddess of the earth, Miami Dade College’s (MDC) interior design students from the School of Architecture and Interior Design created a porcelain tiled dress that won an award for “Most Historical” concept at the March 16 International Interior Design Association (IIDA) Design Mix show. The event was held at the Crandon Golf Key Biscayne Club House, where 18 teams presented their designs on a runway before hundreds of industry professionals and a panel of judges.

MDC interior design students are highly regarded in the local design community and have won awards for each of the seven years that they have participated in Design Mix. The popular showcase began in 2003. Proceeds from the show support local design students with scholarships, networking and exposure. MDC students have thus far received 12 scholarships and eight awards, ranging from “Best Use of a Challenging Material” to “Most Tropical.” In 2011, the team clinched the top prize, “Best in Show.”

For this year’s concept, the team of six students, advised by Marcia Lopes de Mello, associate professor at MDC’s School of Architecture and Interior Design, sketched the design then constructed the dress using 24”x24” porcelain tiles supplied by their sponsor, Imola Ceramica.

Similar to the winning dress, MDC’s interior design programs meld ideas drawn from different cultures from ancient times until the present and from one corner of the world to another. MDC’s School of Architecture and Interior Design offers a total of 43 courses at the Kendall Campus and several certificates. Students use the latest technologies in state-of-the-art facilities, giving them knowledge and experience to successfully achieve their academic and professional aspirations.