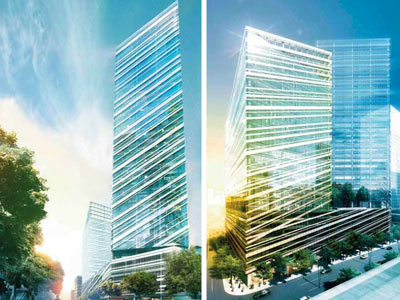 Leading international “green” architect Chad Oppenheim was selected by top Philippine developer, The Net Group, to design the nation’s first certified green project. The Net Metropolis is the flagship pilot development of the recently created Philippine Green Building Council (PHILGBC) to answer to the local environment’s specific needs. Oppenheim, who has a growing reputation for his green design work, participated with the PHILGBC in the actual creation of the nation’s new rating system BERDE (Building for Ecologically Responsive Design Excellence) to apply to the design the first tower in the project, The Net Lima.

“It is extremely exciting to not only be designing something so forward-thinking in terms of sustainable design, but to know that we were actually developing the new standard that will apply to all future developments in the country,” says Chad Oppenheim. “Realizing that if all follow this benchmark, our work will pioneer the future creation of a country’s sustainable, high-design urban landscape, fulfills what our firm looks to do for design and the world.”

The Net Metropolis 5th Avenue was conceived as a landmark to represent the developers’ next generation of iconic and environmentally responsive buildings.

“As The Philippines is answering the call to go ‘Green’ in Southeast Asia, we needed a visionary who could solidify our spot at the front of the movement. Oppenheim is just that,” says Jacques Dupasquier, Chairman of The Net Group.

The First Design Under Berde Rating System
Oppenheim’s masterplan concept for The Net Metropolis, 5th Avenues is composed of three towers that span a 3-acre block and range from 24 to 40 stories resting on six levels of above-grade parking. The project has a clear environmental (and economical) purpose and will further balance nature and architecture by integrating two recreational parks that serve as both amenity spaces and soothing, intricately landscaped focal points. Oppenheim seeks to marry beauty and sustainability; thus, his overall design is derived from a study of solar conditions and outward views. The towers are oriented so each is rotating off the other’s axis, with each subsequent structure fanning out in a dynamic and cascading direction.

Because it’s a pilot project, Net Lima will showcase several green “firsts” in the local market. Given the intense heat of the tropical environment, the most pioneering green feature is the combination of sun shading and a high performance glass curtain wall to minimize incident solar heat gain and optimize natural light while preserving the scenic views. The tower is wrapped with leading edge diagonal aluminum solar screen overlays. These screens form oversails that define the form of the towers, all of which sharply point to the sky above. The double glazed curtain wall glass features a low-emissivity coating that rejects heat.

According to the PHILGBC, the largest and costliest energy consumer for a commercial building in the Philippines is air conditioning. The green façade of Net Lima is a strategic tool to help reduce that cost and energy consumption all year round.

For Oppenheim, whose Miami-based practice includes projects around the globe, “Intermingling and infusing our designs with natural environments is our mission in all designs we do, and that goal is coming to fruition for the first time in an authentic way for the local environment of The Philippines with this development.”

“What appeals to me the most in Chad’s design is aesthetic performance. Net Lima is going to look radically different from other buildings in the Philippines due to its sun shading and curtain wall façade. Yet this element is also key to the building’s ‘green’ efficiency,” says Rufino.

The Philippines’ New Green Standard
Compared to the LEED system, based in the US, BERDE answers to the ecological needs of Filipinos in their own environment. As such, The New Metropolis project leads the way in translating internationally accepted green building practices into a national set of standards adapted to the local conditions and environment.

“As the rating systems from other countries didn’t apply to our tropical weather, laws, best practice, or realities, local industry clamored for our own green building rating system. The PHILGBC responded by facilitating a consultative and consensus driven process to create the Philippine Green Building Rating System (BERDE). This was the best way to transform the market,” says Christopher De la Cruz, Chairman of the PHILGBC.

“The powerful role that Net Lima plays is proof of concept for Green Building and BERDE in the Philippines. We set very high standards in the design and specification for this green office tower,” says Raymond Rufino, Executive Vice President for The Net Group.