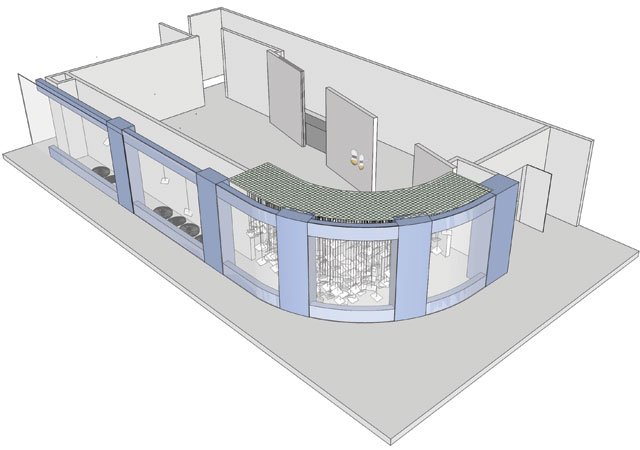 Vinci’s artistic production dialogues with historical modernist and avant-garde movements in Brazil in which the experiential and materiality of the work is given a privileged position in its conceptual and formal make up. The artist enters into dialogue with these traditions by using a variety of materials that enhance the work’s structural dimension and aesthetic potentiality. Her penchant for the juxtaposition of the mechanical with the lyrical creates a compelling tension prevalent in the installations for which she is known. Whether using marble dust, frozen electrical tubes, glass bowls filled with water and metal piping or suspended sheets of paper that gently glide upward and downward in space, Vinci approaches the architectural environment with equal wonder and precision.

Laura VinciLaura Vinci | São Paulo, 1962. Lives and works in São Paulo
Having abandoned painting back in the 1980s, Vinci has dedicated herself to sculpture ever since, and to installation, from the mid-1990s onwards. Her gradual transition into producing larger-scale works stems from her keen interest in interacting with space in incisive fashion. More than just revealing a career marked by ruptures, the wide variety of materials in her installations show a cohesive research, based on the desire to reveal meanings and propositions through the transformation of raw materials – a transformation that may be either commonplace (like the water that turns into vapor or ice) or surprising (like marble turned into a very thin, quasi-ethereal dust in Máquina do mundo, from 2006), or, yet, unusual (like the apples in slow, aromatic decomposition in Ainda viva, from 2007). These processes always have a deep impact upon space, a good example of which is her installation made on the occasion of Arte Cidade 3 (1997), in which an a bandoned building was turned into a huge hourglass by the drilling of a sheer hole onto its top, through which a strain of sand ran down.

Elizabeth Cerejido is a Miami-based independent curator, researcher and artist. She holds an undergraduate degree in Art History and a Masters degree in Latin American Studies and Visual Culture from the University of Miami. Her curatorial and research interests focus on contemporary Latin American art and photography. She is currently residing between Miami and Gainesville where she is pursuing a PhD in Art History at the University of Florida. Cerejido is former Assistant Curator of Latin American and Latino Art at the Museum of Fine Arts, Houston and was Curator at The Patricia & Phillip Frost Art Museum at Florida International University from 2002-2007.