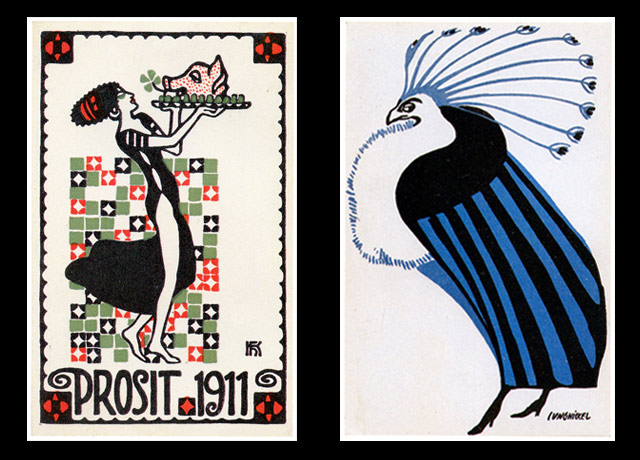 “These postcards are exceptional works of art as well as a wonderful representation of the Wiener Werkstätte’s philosophy of creating well-designed, beautiful objects to be used as part of everyday life,” notes Wolfsonian curator Silvia Barisione. The exhibition at The Wolfsonian complements this extraordinary selection of approximately three hundred postcards with holdings from the museum’s collection, including Wiener Werkstätte textiles, decorative arts, and printed materials.

The Wiener Werkstätte (Vienna Workshop) was a cooperative for artists and artisans founded in 1903 by the architect Josef Hoffman and the painter and designer Koloman Moser, both members of the Vienna Secession, with financial support from textile industrialist Fritz Wärndorfer. The objective of this enterprise was to produce high-quality products based on the principles of the Arts and Crafts movement and modeled in part on the British Guild of Handicrafts. Every aspect of daily life was to be designed, eliminating the distinction between high and low art and allowing for the creation of a Gesamtkunstwerk, or total work of art.

From 1907 until 1919, the Wiener Werkstätte dedicated itself to the production of artists’ postcards, printing 925 postcard motifs by 57 known artists. The purpose of expanding the production line with the design of postcards was to confer the idea of the Gesamtkunstwerk onto this media. All of the major designers and painters who worked for the firm were contributors, among them Carl Otto Czeschka, Josef Hoffman, Emil Hoppe, Oskar Kokoschka, Bertold Loeffler, Dagobert Peche, and Egon Schiele. Some of the most exceptional designs were produced by women artists, including Mela Koehlerand and Maria Likarz. A variety of thematic cards were produced, designed to appeal to different interests and audiences. Together, the series bring to life the rich social fabric of turn-of-the-century Vienna, including its cafes, architecture, fashion, urban types, and humor. The postcards were among the most profitable products of the Wiener Werkstätte, along with the fabrics designed by the textile department, which was established in 1910. Since their creation, the postcards have been in great demand as collectors’ items.

The exhibition at the Neue Galerie was organized to coincide with Leonard A. Lauder’s promised gift of nearly one thousand of these postcards to that institution. In addition to his generosity to the Neue Galerie, Mr. Lauder also has been a longtime supporter of The Wolfsonian. He has made significant donations of posters and ephemeral items, many from the Second World War; a selection of those materials were on view in The Wolfsonian’s permanent collection galleries in 2008. Among his donations were Norman Rockwell’s 1943 “Four Freedoms” posters, which sparked The Wolfsonian’s 2008 exhibition Thoughts on Democracy.

The exhibition is accompanied by a fully illustrated catalogue, edited by Elisabeth Schmuttermeier and Christian Witt-Dörring and published by Hatje Cantz. The first catalogue raisonné on Wiener Werkstätte postcards to be published in English, it features new research from several leading scholars including Witt-Dörring, Schmuttermeier (Curator of Metalwork and the Wiener Werkstätte Archive at the Ӧsterreichisches Museum für angewandte Kunst, Vienna), Detlef Hilmer (independent scholar and specialist on postcards of the Wiener Werkstätte ), and Janis Staggs (Associate Curator at Neue Galerie New York).