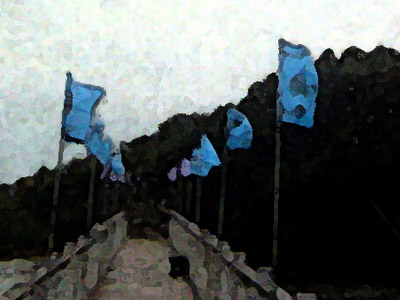 Cortada has mounted this major installation as part of the parks celebration of the United Nations “International Year of Biodiversity. Endangered World: Biscayne National Park features 360 brightly colored flags lining the roads and trails at Convoy Point for over a mile, each representing one degree of the planet’s longitude. 360 Individuals and organizations have adopted an endangered or threatened animal that lives at that longitude and painted an image of that animal on one of the flags. At the same time, each of the 360 participants committed to an “eco- action” that directly or indirectly mitigates the plight of that animal.

In contrast to the exuberance of the outdoor installation is 80.15 W inside the Dante Fascell Visitor Center Gallery. Here, Cortada has created 17 somber works on paper that feature the 17 threatened and endangered species that call Biscayne National Park home. The exhibit is titled for the longitude where the Visitor Center sits to tie it in to the larger installation outside. The pieces were created using carbon paper, a metaphor for the impact (or “carbon footprint) that humans have had on that animal.

The work is fragile, almost ghostly, and viewers see a reflection of themselves in the dark paper under glass, in turn a reflection of their own impact on endangered wildlife. Anyone who remembers working with carbon paper will also remember how even small interactions left impressions and smudges, a further metaphor for the role humans have played in the decline of each animal.