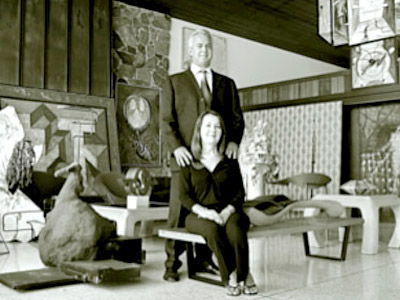 The South Florida-based couple has been collecting contemporary art for over 20 years and their collection presently includes over a thousand works. For this exhibition, co-curators Cristina Nosti and Vivian Nosti, (a sister team that for the purposes of their artistic collaborations are known as Duo Nosti) have selected over 85 original works by more than 70 contemporary Cuban and Cuban-American artists, including painting, sculpture, works on paper, and photographs. The artists featured represent a who’s who of Cuban and Cuban-American artists many of whom are living and working in South Florida, including Gustavo Acosta, Mario Algaze, Luisa Basnuevo, Maria Brito, Adriano Buergo, Pablo Cano, Consuelo Castañeda, Arturo Cuenca, Liliam Cuenca, Ana Albertina Delgado, Christian Durán, Silvia Lizama, Rubén Torres Llorca, Rogelio López Marín (Gory), Beatriz Monteavaro, Heriberto Mora, Gean Moreno, Glexis Novoa, Jorge Pantoja, Lidia Rubio, Baruj Salinas, George Sánchez-Calderón, César Trasobares, Pedro Vizcaino and Ramón Williams, among others. The work of artists from the early exile group (several now deceased) who in some cases have been erased from the history of art in Cuba, such as Eduardo Michaelsen, Agustín Fernandez, Rafael Soriano, Guido Llinás, and Jorge Camacho, is also highlighted.

The exhibit tells the story of the Mosqueras’ passion for collecting through a narrative of quotes and observations about the history and development of their 20-year collection. It highlights their personal adventures in art collecting and tackles such themes as collecting as a way of life, relationships with living artists, how collectors create meaning through their collections, and what they envision as the legacy of their activities.

Arturo Mosquera was born in Pinar del Rio, Cuba in 1953. His adventures in art collecting started almost by accident when a colleague of his suggested dentists could be more involved in the arts as patrons and put him in touch with a magazine whose editor happened to be his childhood friend, the poet and art critic Ricardo Pau-Llosa. The two had studied together at Belen Jesuit Preparatory School, and it was Pau-Llosa who in 1989 suggested that he and Liza start collecting. Pau-Llosa helped to educate both Dr. Mosquera and his wife Liza on the books and articles they should read, the conferences they should attend and began to take them to artist’s studios and recommend which artists work they should acquire. The Mosqueras’ choices were always based on the art they both felt strongly about, and ultimately it was the artists themselves and their friendships with them that led to an even deeper appreciation and understanding of the art of collecting.

Ways of Worldmaking recognizes the Mosqueras’ significant contribution to the South Florida art scene through their programming of exhibitions for emerging and established artists. In 2000, the couple began showing artwork from their collection at Dr. Mosquera’s orthodontic office in the Westchester neighborhood of Miami-Dade County. They established a quarterly program of exhibits, “Art @ Work”, in the lobby of the office and created a print newsletter that served as a mini-catalog of each show. The word began to spread about these exhibits and artists clamored for a space on the exhibition schedule. The openings began to draw bigger and bigger crowds, including curators, collectors and art critics from all over the globe. They later opened Farside Gallery, a non-commercial, alternative art space, adjacent to Mosquera’s orthodontic practice, to showcase even more art and artists. Ways of Worldmaking celebrates this South Florida couple’s outside-the-box thinking and approach to collecting, nurturing, promoting and exhibiting contemporary art in our community.

“Will this collection stand the test of time and endure into the future? And where will it be housed to inform and teach others? “Perhaps his hometown of Pinar del Rio, perhaps La Habana (as the great Guido Llinás suggested), or perhaps Miami, as many of the artists in his collection suggest,” explains co-curator Vivian Nosti. “In the end, it will be a legacy worthy of study and admiration to see what the Mosqueras have done for artists, art history, and ultimately future generations.”
A series of panel discussions with the collector and many of the artists featured in the exhibition who live and work in South Florida, will take place during the exhibition period. For more information about guided tours and other activities, please contact the MDC Art Gallery System at 305-237-7700 or galleries@mdc.edu