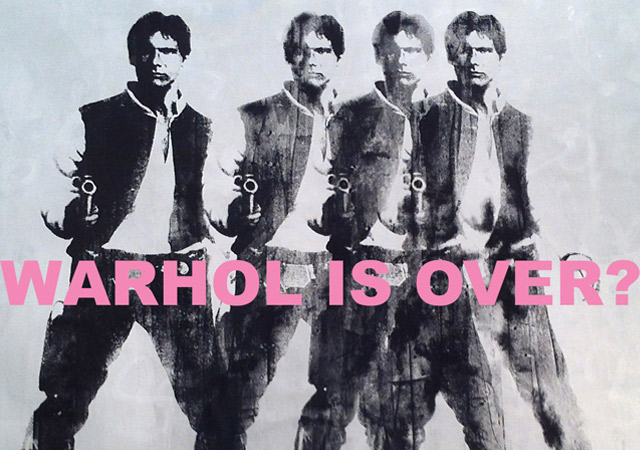 Robert Fontaine Gallery is opening the exhibition Warhol is Over? A group exhibition composed of eleven local and international, emerging and established artists who explore the after effect left on the art world by one extravagant persona and attention grabbing artist named Andy Warhol. For better or for the worst (depending on which art historian you listen to) Warhol, seen as a genius and remarkable business man, surfaced in New York City at a time when candy coated theology was never before explored in the realm of high art. He superimposed a belief or rather a reflection of his own time in history where cultural materials, common or not, had the ability to transcend as a subject in an artist’s work. His viewpoint was deemed innovative and fresh, both in color and social commentary.

In addition, he forever preserved or perverted the timeline in art history by incorporating the ordinary into his own mass produced work. For this reason, Warhol has secured more than his “fifteen minutes of fame”. His works show a significant increase in value despite the current economic stagnation and commands a shocking 20% of the world’s contemporary art market.

Warhol critics do contest he manufactured art in the same fashion as assembly lines. Warhol made movies with actors who he supplied drugs to, never taking drugs himself. Warhol gave little verbal hint of what he was implying as an artist, but let the work speak for itself never hinting at how his work should be perceived contextually.

In his private life he took his mother to church every Sunday, he hid behind a wig, and he lived in an opulent New York apartment, drove around in a Rolls Royce and was an obsessive collector of cookie jars, dental molds and second rate Victorian religious paintings. Who was this guy? What did he leave us? Why are so many people still in love with his work? Or, do you consider him a flamboyant commercially driven whore that enabled those around him for his own masquerade?

Warhol is Over? brings together a handful of works by artists: Paul Warhola, Damian Hirst, Tina la Porta, Troy Abbott, Simon Thompson, RYCA, Paul Rousso, Josafat Miranda, Paul Insect, Jesse Faber and Mantis, who explore how Warhol’s sensation or speed bump in art history has affected their own work and the art market of today that is still very much shaped by Andy Warhol’s blue print.
Warhol is Over?