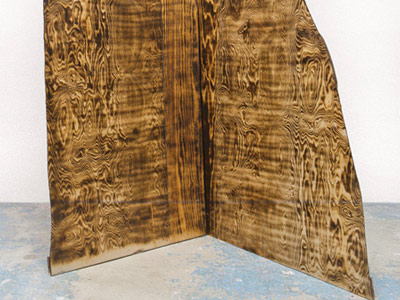 Fredric Snitzer Gallery is currently presenting an exhibition of new work in a variety of mediums by artist Loriel Beltran, marking his second solo show with the gallery. The materiality of an artwork and how it is composed has become a driving force in Beltran’s large body of work.

Beltran is perhaps best known for his process driven work, fueled by a desire to engage the dynamic forces of expression not through the representation of an idea, but the manifestation of an idea through its effects on materiality. By focusing on the actual process of making art, Beltran engages the limitations of the material properties, while responding to the representation of the symbolic format that artwork is displayed. His subject matter is not simply the truth of materials, but the life lived while making the work.

There is an immense employment of labor and resources required to produce, display, transport and maintain even the simplest or most conceptual art objects. In construction, FALSEwork is the name given to temporary structures built to support a work until it is strong enough to maintain itself. These structures are the byproducts, the invisible work performed for the purpose of the final product. By dealing with a process-oriented approach to art making, the notion of the byproduct has become increasingly significant as it often becomes the art object itself. A clear example in this exhibition is a cube containing a gallon of the artist’s sweat, collected while making some of the works in the show. This provides some insight into the artist’s practice as a performative activity, or inversely, seeing his practice as a mere activity of labor. FALSEwork could also refer to the condition the works share. The natural inevitability of labor and its relationship to artistic intentionality questions all preconceived notions of reality and fiction. In this series, Beltran doesn’t attempt to create a specific image, rather an object that makes you aware of its creation and the effort that embodied that formation.

In the Project Space will be Leandro Vazquez’s exhibition, “Outside of the Enforced Routines of Cultural Consumption.” Likewise a promulgator of process-driven work, Vazquez strives to challenge traditional notions associated with everyday materials, exploring more simple solutions through employment of fewer materials. His questioning of widely accepted ideas is expertly captured in his photographic series and intriguing sculptures.