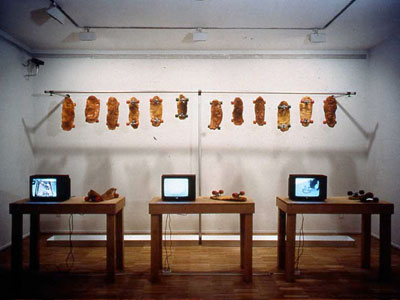 The new KaBe Contemporary gallery is presenting José Antonio Hernández Diez: Recent Work, the Venezuelan artist’s first solo exhibition in Miami. This exhibition presents new work in progress from José Antonio Hernández Diez and will evolve as it travels to new venues. After its presentation at KaBe Contemporary this exhibition will travel to Periférico Caracas among other venues in 2010. This show, which opened to coincide with Art Basel Miami Beach features the artist’s most recent work, a photography installation, reflecting the sentimental side of human beings. People who were touched by a personal tragedy, perhaps the loss of a loved one due to everyday crime, and seek some sort of consolation or closure. His work explores time travel and the possibility to say one last goodbye or undo facts, such as death, thus contributing to a more humane and happy society.

José Antonio Hernández Diez began his artistic career at the end of the eighties. His early works are characterized by a strong emotional undercurrent. Among his most important works at this time were Anabel Lee (1988) and Houdini (1989). In the nineties his works reflected religious and socio-economic criticism. Vas pa’l cielo y vas llorando (You go to heaven and you go crying,1992) and In God we Trust (1990) condemn the economic and social inequalities between the United States and Latin America. At the end of the nineties his work began to speak about how certain products are consumed as social branding. La hermandad (The Brotherhood, 1994, Fundación la Caixa Collection, Barcelona) was a remarkable piece from that series. In the next decade his work began taking a much larger scale in the form of sculptural pieces – everyday objects blown out of proportion to reveal new uses and content. He also began to explore photography. He produced a series using the initials on tennis shoes to spell out the name of famous philosophers.