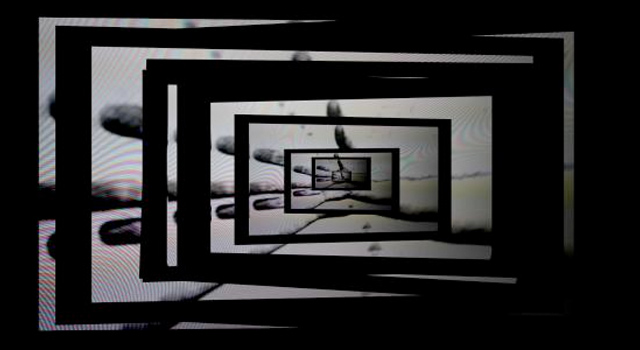 After Some Twisted Lines, is Quisqueya Henríquez’s third solo show with David Castillo Gallery. With this works, Henríquez deepens her investigation into appropriation, architectural form and Art History with new works in collage, fabric, video, and Rorschach technique.

After Some Twisted Lines grapples with the Lacanian condition, which asserts that entrance into language and visual representation tragically severs humans from the unadulterated real at birth. Henríquez challenges the impossibility of the real by exploring how we exist, communicate, and desire after some twisted lines. Rorschach references the psychological test for which a subject interprets inkblot images. Henríquez’s Rorschach test, bold in scale and ornithological in aesthetic, invites phenomenological response, affective relationships and pleasure. The artist builds a menagerie on the foundation of clinical analysis.

Darwin’s The Expression of the Emotions in Man and Animals is a seminal taxonomy of facial expression across species. To browse its pages is an exercise in the instability between self and other, originality and appropriation, art and research, procedure and spontaneity. Henríquez adapts this framework for the post-internet age. After Some Twisted Lines evokes the process of computer screen-capture that subtly informs the artist’s works in collage. The resulting artworks bear the names of renowned conceptual artists, from Surrealist Hannah Hoch to fashion, still life and portrait photographer Irving Penn. Henríquez’s collage emotes Dan Flavin’s fluorescent minimalism, Louise Lawler’s meta-photographs of artworks on exhibition, and Gordon Matta-Clark’s site-specific interventions upon abandoned buildings. The dominance of social media and virtual exchange has led Olga Goriunova to coin autocreativity, a methodology for thinking creativity as an assemblage of human, technical and social. Henríquez works at the forefront of autocreativity to make salient the continuity between appropriation and network.

After Some Twisted Lines lays bare the problematic of making artwork within Art History; locating materiality within semiotics; inhabiting the intimacy of interior within architectural countenance; and recognizing beauty within a network culture that numbers it a scarce resource. Henríquez gives form to what Arakawa and Gins theorize as “body-wide” modes of sensing, and does so in full view of convergence culture. Henríquez asks the viewer to defy the shortcomings of simulation and lust after the real.

Henríquez was born in Havana, Cuba and lives and works in Santo Domingo, Dominican Republic. After graduating from the Instituto Superior de Arte in Havana, Cuba, Henríquez has exhibited throughout Latin America, Europe, and the US. Her work is in important private and public collections including El Museo del Barrio, New York; Museum of Contemporary Art, North Miami, FL; Miami Art Museum; Cintas Foundation, NY; Rhode Island School of Design; and Colección Patricia Phelps de Cisneros, NY, among others. Henríquez had a mid-career retrospective at the Bronx Museum of the Arts, which later traveled to Miami Art Museum. The artist’s recent solo exhibitions include the McColl Residency in North Carolina; BARNA and Centro Cultural de España, both in Dominican Republic. Among her recent group exhibitions are the Cintas Foundation, Miami and the Museum of Contemporary Art, North Miami, FL.