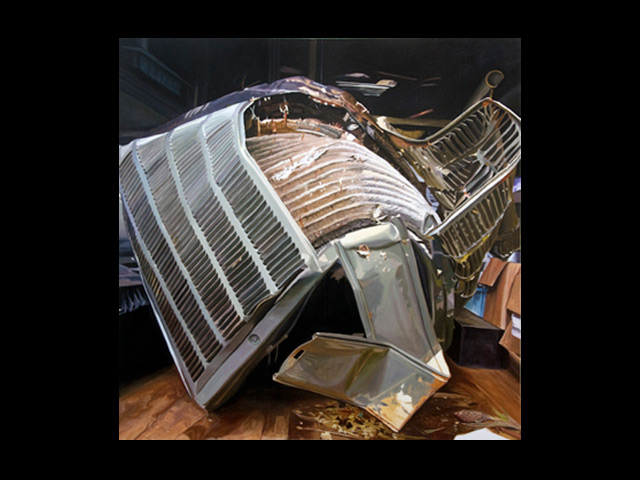 The skylines lit up at dead of night, the air-conditioning systems cooling empty hotels in the desert and artificial light in the middle of the day all have something both demented and admirable about them. The mindless luxury of a rich civilization, and yet of a civilization perhaps as scared to see the lights go out as was the hunter in his primitive night. – Jean Baudrillard

In Greek legend Zeus execrates the god Prometheus to a horrendous fate. What prompts this punishment is not the fact that Prometheus creates our human race. Rather, Zeus’ rage is incited by the fact that Prometheus bestows us with 2 gifts: fire and creativity. The question that inextricably rises is “What then did Zeus know that Prometheus didn’t?” Was he aware we were headed down a path of Baudrillard’s “mindless luxury” only to be left paralyzed by the lights going out? Did he see that such passions can actually incite the opposite extreme of nihilism and ambivalence?

Timothy Buwalda’s 4th solo show forces us to grapple with such unnerving questions. Capturing moments evocative of suspense, violence, noise and destruction we must shape our own narrative threads and binary discussions on these ideas of creation and carnage. In the moments after a gloriously manufactured symbol of status or convenience loses its intended purpose, we are faced with a conscious and rather acute juncture of choice. Our guides become visions that evoke both a sensation of loud indisputability and serene contemplation; a dichotomy that reflects our own human instability. Buwalda composes an idea of life and purpose extending beyond our own subjective limits. A story that needs to be told in our all-too-distracting 21st century, global, cultural interactions. And yet, he does not leave us completely suspended within this subjective crossroad.

In her introduction to Frankenstein Mary Shelley asserts, “Value is the revelation produced by imagination.” Frankenstein serves as a cautionary tale against many modern Promethean ideals we have of progress. In fact, it was originally subtitled “The Modern Prometheus” and Buwalda’s literary homage is clear. If we are forging things absent of imagination and based only on convenience and reason, we are, in essence, fashioning nightmares. It is of no coincidence then that Buwalda designated his most enigmatic and ominous piece, Frankenstein. The intent should not go unheeded neither should Buwalda’s invitation to open a dialogue concerning our own contemporary nihilism. For all of our striving and efforts to produce such specifically defined items of convenience we may be finding ourselves in a world of worthless, unimaginative destruction. Whether we are looking at a mutilated Bentley or a mangled air conditioner, Buwalda is asking us how we define the worth and value of not just our acquisitions but ourselves.